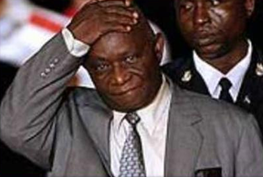 Former Vice-President of Sierra Leone, Solomon Ekuma Berewa (in photo), is reported to have advised the opposition Sierra Leone Peoples Party (SLPP) to consider dropping the 2012 election petition case it has with the ruling All Peoples Congress (APC), possibly, to save money, time, and labour, and to help the party concentrate on preparing for the 2017 polls.

He reportedly gave the advice during a recent meeting at the party office in Freetown.

Mr. Berewa is said to have confessed that the SLPP lawyers did a bad job during the preliminary case which was recently thrown out of court on procedural ground. He reportedly used the meeting to castigate party members who keep fostering disunity within the party via their double standards and other unhealthy practices. He is said to have reminded the party that further pursuance of the matter will not only be cost effective but also time-consuming.

Solomon Berewa was flag bearer of the party during the 2007 elections which he lost to president Koroma and gracefully conceded defeat.

It is not yet clear whether the SLPP is prepared to heed the advice of Solo B, as he is popularly called.

Close call for five on Matotoka-Ko...