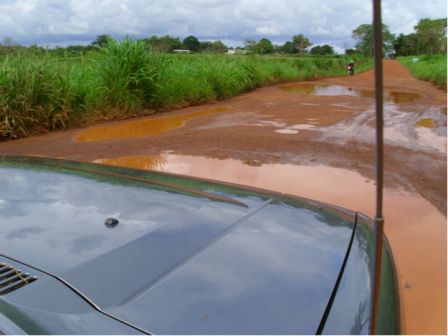 Moyamba, (SLENA) – In a bid to achieve President Koroma’s agenda for prosperity on infrastructural development, Works, Housing and Infrastructure, Minister Alimamy P. Koroma last week joined Members of Parliament on Works Oversight Committee on an inspection tour in parts of the South of the country.

During the inspection tour of the Taiama to Njala road awarded to Tee-Marc Construction Company, the Chairman of the Oversight Committee, Hon Komber Kamara said they were quite impressed so far with the quarry site of the company, adding that this can enable them to take through the venture of the 14 kilometres road from Taiama Junction to N’jala campus.

He went on to inform members of the company that the team was not around to investigate but to see and have first hand information on progress made so far.

In Moyamba, where the company is doing the in-township roads of 5km, the Chairman of Tee Marc, Remi Oluyamie told the visiting team that within the available resources they had done the drainages, culverts and other additional works.

Mr. Remi pointed out that pavements are expected to be done after the rains, emphasizing that the company is well equipped in working concurrently on similar projects at Pujehun and Mattru Jong.

He assured government and residents of these townships that the company is working assiduously to meet all their targets within acceptable work standard.

Works Minister said he was quite impressed with the work and advised that the company continues with stone based application for the people to realize their goal.

He called upon the Oversight Committee members to pile pressure on Ministry of Finance in order to speed up payment as the company had done well in pre-financing some of these projects.