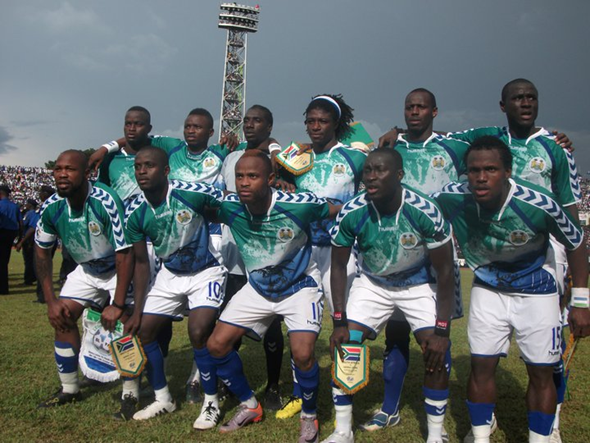 The Tubarões Azuis (Blue Sharks) of Cape Verde and the Leone Stars of Sierra Leone will battle it out on Saturday evening, June 15th in the fifth fixture of the 2014 World Cup qualifiers in Praia, Cape Verde this weekend; a match that will be deemed useless if Tunisia wins against Equatorial Guinea over the weekend.

Both Cape Verde and Sierra Leone have never qualified for the World Cup and while the host have only made it to one Africa Cup of Nations tournament, the visitors have been there twice.

Cape Verde were the surprise packages of the 2013 editions in South Africa where the 500,000 populated nation reached the quarterfinals against all odds at the expense of previous World Cup participators Morocco and Angola but Sierra Leone did not make it through the group stages in any of their two outings.

A large proportion of players in both squads are based overseas, in Asia, Europe and the Americas but Cape Verde have a large number of its players having been born away from the islands as well.

Having secured only three points in their last four outings, Cape Verde will not want to lose this weekend especially after FIFA’s decision last week had gave them three points and three goals in the first match against Equatorial Guinea because the latter fielded a large number of naturalized players.

Now Cape Verde has some good chances to qualify and will hunt the win on Saturday in order to reach second place of the group and hope Tunisia loses to Equatorial Guinea, thus paving way for both countries to fight it out on Match Day 6 in a winner takes all battle.

Coach Lucio Antunes has reshaped and refreshed his squad bringing in Platini and Djaniny to replace lone striker, Mendes, who is out injured while inspirational Captain, 34-year old Fernando Neves will be seen at centre-back (if he is physically okay), giving instructions to youngsters; Da Graca, Varela and Nivaldo or have his slot given to Gegé. The Coach will opt for a 4-4-2 formation rather than the traditional 4-5-1 they usually play.

Sierra Leone gave away the lead twice against Tunisia in Freetown last weekend in a match that could have probably been a determiner towards their 2014 World Cup qualifying hopes but Coach McKinstry is optimistic his squad still have a chance to progress to the next stage despite trailing the Tunisians by five points with two matches remaining.

Leone Stars will be without suspended player Sheriff Suma while Gibril Barrel Sankoh is available after serving a match ban for two bookings. Both star strikers, Ibrahim Tetteh Bangura and Kei Ansu Kamara have been ruled out due to injuries and Mustapha Hadji Bangura will likely be given the nod upfront to twin with Mohamed Poborsky Bangura while one or two players will be given a debut at least as substitutes.

In goal, the USA based goalkeeper, John Trye is expected to win the berth while his contemporaries Habib Sesay will have to wait a little longer to add to his former caps and France based Solomon Zombo Morris chances of making his international debut will be shattered.

With so many available midfield players, Coach Mckinstry will have a tough task to choose the best four among them in a 4-3-1-2 formation but no doubt he will place his confidence on Samuel Barlay- the most experience midfielder in the squad, Mohamed Medo Kamara, teenage sensation- George Kweku Davis and Alhassan Crespo Kamara, who will be expected to play behind the attackers.

If FIFA’s decision is cancelled by the Appeal’s Committee, the Group B encounter between Cape Verde and Sierra Leone will be useless if Tunisia wins against Equatorial Guinea.

On the other hand, if FIFA’s ruling is not annulled by the Appeal’s Committee, a Cape Verde win and a Tunisia lose or draw means the Group winner will be decided on Match Day 6.