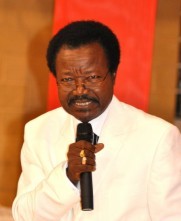 Sierra Leone’s envoy to the People’s Republic of China, with accreditation to several other countries in south-east Asia has spoken of his determination to not only effectively represent and protect the interests of the sending (Sierra Leone) and the receiving (China) states, but that he is fully prepared to work towards supporting Sierra Leone’s quest for development.

Ambassador Victor Bockarie Foh spoke these words on Friday, 14th June, ahead of him, taking formal leave of absence of His Excellency the President, Dr Ernest Bai Koroma, an event slated for Monday, 17th June and thereafter. He assured of working towards adequately representing the interest of his country, especially given the current drive for prosperity. This is also against the backdrop of China’s continued growth in world affairs, especially from the viewpoint the country today being the world’s second largest economy.

With his coming to China as Ambassador Extraordinary and Plenipotentiary, Victor Foh   committed himself to amongst others, work towards seeing how  Sierra Leone’s culture could be exposed, given that both China and Sierra Leone have rich cultures.

Speaking early this year, he expressed optimism that his presence in China as Ambassador is not just to further uplift the ties from the framework of China’s support to Sierra Leone in areas of infrastructural development, which has been very commendable, “but we will also work towards extending the cultural relationship between the two countries” as well as expanding on the political diplomacy that has been existing between the two countries for years. In line with these tasks ahead of him, he believes public support from Sierra Leoneans across Asia will largely cultivate his success in the coming years as envoy to China. He has also repeated his desire to effectively serve every Sierra Leonean despite of one’s political affiliation and tribe.

Ambassador Foh has been a strong pillar in the governance structure of the ruling party in Sierra Leone, the All Peoples Congress Party; a party he served as Secretary-General for years until his appointment. He played a pivotal role in the recent past general elections, just as in the case of the previous elections, which saw the election of President Koroma on the first ballot, witnessing the defeat of a number of candidates including a former military officer.

The diplomatic relations between Sierra Leone and the People’s Republic of China started in 1971. Since then, areas of Chinese investments in Sierra Leone include the China Friendship Teaching and Referral Hospital at Jui; the new Foreign Affairs Ministry building    Sierra Leone’s human resource capacity by granting scholarships to deserving Sierra Leonean students yearly with presently 0ver  120 students in various universities and regions across China. Also, by January of 2012, Sierra Leone signed a $1.2 billion land investment project with China Hainan Rubber Group for the development of a 35,000 hectare rubber plantation and the cultivation of rice on a 100,000 hectare farm. By the same year, too, 25% shares were bought by Shandong Steel Company in one of the country’s iron ore mines, operated by African Minerals. Government also signeda million dollar agreement with the China Railway International Consortium for the construction of a brand new airport in the mainland of Mamamah in the outskirts of the country’s capital, Freetown. Only recently a Chinese company, China Kingho Energy Group signed a six billion dollars investment Memorandum Of Understanding with the Sierra Leone Government.

This is also not forgetting the role Sierra Leone played in ensuring China’s entrance into the United Nations General Assembly.

Victor Bockarie Foh succeeds outgoing Ambassador Abubakarr Multi-Kamara who was earlier posted to the United Nations as Sierra Leone’s Permanent Representative of Sierra Leone but could not go, due to health reasons.

Ambassador Foh will depart Freetown for China on the 17th June.