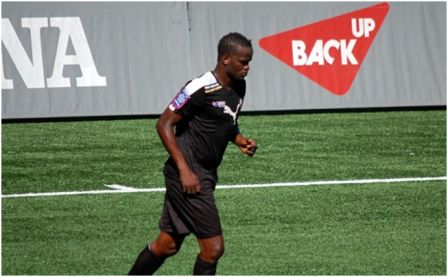 The newly-appointed Irish technician of Leone Stars, Johnathan McKinstry will be leading Sierra Leone’s national side, Leone Stars, out against the Carthage Eagles of Tunisia in the return leg of the World Cup qualifier in Freetown this Saturday June 8th 2013 in a crunch encounter at the Brookfield National Stadium.

Sierra Express Media Sport UK can authoritatively reveal four of Sierra Leone’s Swedish-based players will be arriving today to meet McKinstry and his backroom staff for the first time since his appointment, and they will be joining the rest of the players already in town.

David Simbo (in photo) from Sandvikens IF, Ibrahim Koroma from Varbergs BoIS, Alhassan Kamara from Orebro SK, and Mohamed Pobosky Bangura who recently signed on loan for Elfsborg.

This encounter, according to its magnitude, is very vital for the home team to take all three points or bust the opportunity of making Brazil 2014.

In recent months Sierra Leone has faced Tunisia three times, twice in the African Nations Cup qualifier and World Cup qualifiers with two draws and a 2-1 win for the Carthage Eagles in Tunisia, with Alhassan Kamara scoring away from home for Leone Stars.

Leone Stars Irish manager McKinstry will have to ensure Leone Stars pull up a back to back victory against Tunisia and Cape Verde Island respectively in a bid to stack any real claim of their intention for Brazil.

According to media reports from Sierra Leone, during McKinstry’s unveiling ceremony at the National Stadium’s Atlantic Hall, “I am happy to accept the job and we are going to be doing our best to produce results, we have three games remaining and we know it is going to be tough”, McKinstry told journalists.

Resilience: the key for sustainabl...