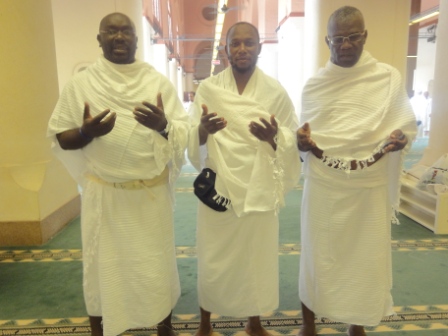 Mecca: Sierra Leone’s Social Welfare, Children’s and Gender Affairs Minister has called on Sierra Leoneans to pray fervently for the nation and its leadership; irrespective of political, ethnic and regional affiliations.  (Photo: From left, Hon. Moijue, Dr. Ramadan and Alhaji M.S praying for the nation in Medina)

Hon. Moijueh Kaikai who is currently in the holy land of Saudi Arabia with Alhaji M.S. Kargbo of the Office of the President for the 2013 Muslim pilgrimage (Hajj) arrangements made the remarks shortly after they completed the minor Hajj in Islam ‘Umrah’ last Thursday.

In a brief interview with the two men after performing the ‘Umrah’, they said: “It’s good to use the opportunity when performing such a religious rite to pray fervently for the country’s leadership and the nation as a whole”.

They said they prayed for the protection and guidance of Dr. Ernest Bai Koroma, and for the unity and peaceful co-existence in Sierra Leone.

“I think every patriotic Sierra Leonean needs to put politics aside and pray for the country. If our country forges ahead, it would be in the interest of all Sierra Leoneans,” Kaikai and Kargbo said.

Kaikai is leading a Hajj Mission team to Saudi Arabia, comprising, Alhaji M.S Kargbo, Special Assistant to H.E the President on Political Affairs who also doubles as a senior member of the National Hajj Coordinating Committee and Dr. Ahmed Ramadan Jalloh, representing the Islamic Scholars in the country.

The trio has held several meetings with Hajj officials in the Kingdom, including the Saudi Pilgrimage Minister, Dr. Bandar bin Mohammed Hajjar and they have signed 2013 Hajj contracts with Real Estate and Transportation companies. They are expected to return next week.

After battle of the Titans Pujehun elect...