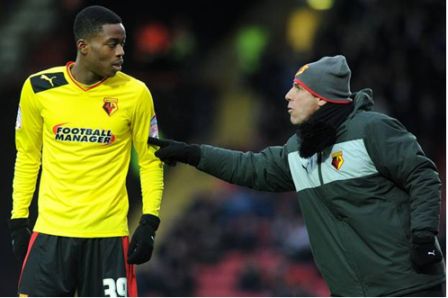 Sierra Leonean born Watford midfield maestro Nathaniel Chalobah, on loan from Chelsea, has been named in the England Under-21 squad for next month’s European Championships.  (Photo: Nathaniel & Zola talk tactics)

The loan of the 18-year old continues in style and is very much instrumental in the Zola squad; his wonder strike against Hull City was the turning point that took his game to another level.

He was in the Watford squad that eliminated Leicester City in the Npower championship playoff, which set up a cracker of a final against Crystal Palace at Wembley.

Chalobah, who has impressed under the guidance of Gianfranco Zola at Watford, was named England Men’s Youth Player of the Year at an FA award ceremony earlier this year.  His form has left Stuart Pearce no choice but to include him in his 23-man squad ahead of the competition, which will be held in Israel.

The Sierra Leonean born hopes to feature when the Hornets take on Crystal Palace in the Championship play-off final later this month.

Sierra Express Media Sport understands that Chelsea will be keeping the midfielder, who can play in defence and in midfield, with a longer contract amid interest from premiership rivals.

Chalobah admitted a few months ago that he hopes to feature for the Blues next season and he is confident he can make an impact.  However, Chelsea is unlikely to use him as part of the first-team squad and will probably look to loan him out again so he can continue to get first-team football experience.