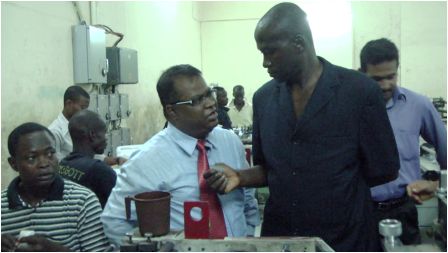 General Manager, Sony Ramakrisham, leads the Trade minister on a conducted tour of the factory

On arrival, the minister was received by the General Manager of the company, Mr. Sony Ramakrisham who later led the minister on a conducted tour of the facility.

Welcoming the minister and his entourage, Coordinator of Milla Group (SL) Ltd, Alhaji Ibrahim B Kamara, thanked the Trade Minister for what he referred to as a historic visit. “Mr. Minister, we at the Milla Group (SL) Ltd., are very humbled and delighted to have you and your esteem delegation here with us today and also to extend to you our usual warm welcome to our establishment.”

While introducing key personalities of the company, Alhaji Kamara said he was particularly excited when they received a letter from the ministry informing them of the minister’s visit. “Firstly because we are receiving in our midst no less a person than the Minister of Trade and Industry, secondly, Sir, you will go down in history, that since the inception of Milla Group (SL) Ltd, you are the very first Minister of Trade and Industry to visit and make a familiarization tour of our factory.

Work in progress at the Milla factory

He said the factory came into operation in 2002 with just 5  production turning out plastic bags, bowls, cups and hand fans and work force of 60 national staff. He noted that despite the many constraints and challenges the company has faced over the years, they have managed to achieve great strides with the introduction of very sophisticated production systems and equipment, turning out a wider range of products, such as plastic household commodities and plumbing materials, etc.

On the human resource front, the Coordinator said apart from the contract and casual staff, there are 102  national staff gainfully employed inclusive of 5 in the senior cadre.

Before concluding his welcome address, he introduced some personalities of the company who included the General Manager Mr. Sony Ramakrisham, Mr. Laxman Nandwani, son of Mr. Mahesh Nandwani, the highest shareholder of Milla Group and proprietor of Pee Cee & Sons, the mother of Milla Group (SL) Ltd. Mr. Daniel Jiju, Chief Engineer and Rakesh, the Assistant to the General Manager.

The Coordinator used the occasion on behalf of staff and management of the company to congratulate the minister on his appointment to the very important office in the administration of our esteemed president, HE Dr. Ernest Bai Koroma. He wished the minister every success in his stewardship to this nation.

Speaking at the occasion, the General Manager, Mr. Sony Ramakrisham expressed his personal appreciation of the minister’s visit which he described as historic and a blessing for the ‘Agenda for Prosperity.’

Production of PVC pipes in progress

Continuing, the GM said, “Mr. Minister, as already indicated by Alhaji Kamara, since the inception of our business we have been going through serious challenges but due to unrelenting efforts, the factory has grown to super standard, despite  some constraints. A major concern is the availability of space for this factory to expand. We intend expanding the company’s business in some areas in the country in order to make meaningful contribution towards development and creation of jobs but this can only materialize if government favorably considers some of our needs, such as land space in the country”.

Mr. Sony Ramakrisham further disclosed that they have gone almost through the final processing for the EPA license for the factory. “For your information, within ten years of operation in the country, we have installed pipe-borne water serving the Fisher Lane community, making financial donations to the youths, towards sport activities, donations to storm victims, employing youths in the area, and financial assistance for medical treatment to the sum of  Le7m for victims seriously wounded in the community by colleagues.  Also our company sponsored the recent lantern activities for the 52nd independence anniversary,” he added.

On his part, Minister of Trade and Industry, Alhaji Usman Boie Kamara thanked the executives of Milla Group Limited for the effort they are putting toward boosting the economy of Sierra Leone.

The Minister, who was taken on a conducted tour inside the factory, said he was highly impressed with the sophisticated machines, adding that he was looking forward as to how best he could help them in the company’s demand for acreage where they intend building a bigger structure.

He also advised the company to keep up the standard of their products, saying he was very much disturbed by the proliferation of polythene bags being thrown around in the streets of Freetown, and advised that the company should find ways in disposing or recycling its waste products.

The minister noted that his government’s drive is to encourage private sector investment in order for them to improve and flourish, noting that Milla Group Limited is the leading manufacturing group in Sierra Leone in the production of water tanks countrywide. He said he was also impressed by the fact that the company exports it products to the sister countries of Guinea and Liberia.

As the rainy season approaches - M...