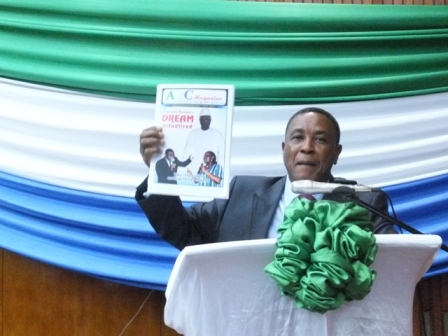 The workshop held on Thursday 18th April 2012 at the Miatta Conference Hall, which attracted hundreds of public servants, was themed: “Working towards Prosperity with Positive Attitude”.

The workshop which was held in consultation with the Ministry of Information and Communications, also witnessed the official launching of the maiden edition of the ABC Magazine, whose content is rich with all the activities of the Secretariat since the appointment of the Executive Director, Ivan Ajibola Thomas and the National Coordinator and Second-in-Command Nanette Thomas, to date.

Keynote address and official launching of the ABC Magazine were done by the Minister of Information and Communications, Alhaji Alpha Kanu.

Cross section of the participants

The minister’s keynote address was focused on young people. He advised the young people of Sierra Leone to put all their efforts in educating themselves, as according to him, the future is bright only for those who are educated.

He made no secret about how proud he was with the progress being made by the ABC Secretariat, which happens to be one of the country’s governance institutions.

Today, he continued, the whole world craves for development, noting that Sierra Leone unfortunately lacks the simple middle level man power. He said it is only education that will lead Sierra Leone to the change we all crave for.

In launching the magazine, Minister Kanu elaborated on the rich content and extra-ordinary art work in the magazine, while encouraging the general public to obtain a copy and learn about the successes and challenges of the Secretariat.

In his statement, the Commissioner of the National Youth Commission, Anthony Koroma stressed that prosperity does not come by chance, but through hard work and perseverance. He said there is need to rebrand and reposition the youths of Sierra Leone for the achievement of the agenda for prosperity.

Vice Chair Conference of Principals, Western Area, Mrs. Ophelia Morrison said it is very important for all to work on their attitudes towards education. The teachers, she said are objects of change, but faced with numerous challenges. She furthered that positive behavior creates an enabling environment for learning. She urged all to inculcate the positive attitudes of smiling, seeking solutions, and being professional, among others.

The Representative of the Vice Chancellor of the University of Sierra Leone disclosed that there has been a marked deterioration in the standard of education in the country over the years.

He said it is imperative for educators to develop the attitude of integrity and serve as role models in society. He warned that the agenda for prosperity will only succeed if the state halts the falling moral standards in the country.

President Sierra Leone Chamber of Commerce, Mrs. Gladys Strasser King said she was very much impressed by the choice of theme of the workshop. She spoke on the importance of reintroducing civic education in schools, noting that attitudinal and behavioral change is a vital prerequisite for the success of the agenda for prosperity. Attitude, she said, determines how high or low an individual goes in the future.

Inspector General of Police, Francis Allieu Munu said the security sector is self motivated with a positive mental attitude.

He said attitude is about values, noting that the attitude of individuals moderates the way they respond to things..

Special Presidential Adviser on Gender and Women’s Affairs, Ms. Naasu G. Fofanah said the act of persuasion is an integral strategy to change. Sierra Leone, she said, will not achieve prosperity without positive attitudes towards women and girls.

Chairman Information and Communications Committee in the House of Parliament, Hon. Binneh Bangura reiterated that the right attitude is needed for the achievement of the agenda for prosperity.

Statements were also delivered by the Director of HIV/AIDS Secretariat, Dr. Brima Kargbo and a representative of the Executive Director Environment Protection Agency.

Deputy Minister of Information and Communications, Theo Nicol delivered the welcome statement, while the opening session of the workshop was chaired by Mr. Gilbert Cooper.

The technical sessions were ably chaired by the eloquent and dynamic National Publicity and Outreach Coordinator in the Office of the Government Spokesman, Abdulai Bayraytay.

A brilliant paper on positive attitude, transparency, accountability and prosperity was delivered by the Director of Public Education and Outreach Anti Corruption Commission (ACC).

The Secretary to the Cabinet and Head of the Civil Service, Mr. Ernest Surrur, religiously spoke on the topic positive attitude and improved service delivery for prosperity in the nation.