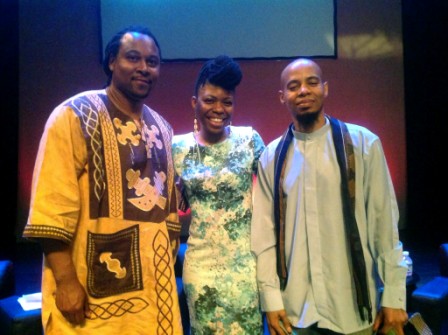 A three member panel consisting of Africans from the Continent, Caribbean and the United States recently held a ROOTS and STARS: “Prayer Spears” series discussion on multiple expressions of one of the highest mandates of faith: to fight for justice and build community at the Schomburg Center for Research in Black Studies in Harlem, New York.  (Photo: l-r Professor Kwesi Amoa, Desiree Gordon, Sduduzo Ka-Mbili)

Ms Gordon, who is from Antigua, has been the series curator for the CCCADI for 2 years.  “Among my many responsibilities at CCCADI, Roots and Stars is among my favorite and most treasured,” she said in a statement issued via phone from her Harlem, New York office.

Ms Gordon also articulated, “The series examines ancient African traditions, New World religious customs, as well as contemporary spiritual practices to understand the foundation and evolution of spiritual reachings throughout the Black World.  Peering through the lenses of ethos, aesthetics, and practice, Roots and Stars uncovers voices of vibrant visionaries and tradition keepers who attest to the breadth of our contribution to the Global Soulscape.”

Dr. Amoa, a second-generation Akan practitioner trained as a traditional African priest with a particular interest in understanding the way African people worship God before the influence of Christianity and Islam discussed the establishment and use of the Akan Cultural Center Onipa Abusia in Queens New York.  Calls to Dr. Amoa’s office seeking comments were unsuccessful.

Ka-Mbili born in Engonyameni, a rural area of Durban South Africa, arrived in the United States in 1998 as one of three recipients for a full scholarship to train at the world-renowned Alvin Ailey American Dance School in New York City.

The event was “quite educational as each panelist shared their cultural and spiritual experiences growing up in Africa, USA and the Caribbean,” Ka-Mbili said.

During the discussion, Ka-Mbili described the efforts of his Christian mother and his “Sangoma” traditional healer/witch doctor father to fight injustice, defeat apartheid and build a better community in a New South Africa.

Traditional healers in South Africa practice traditional African medicine and fulfill various political and social roles in the community including healing emotional, physical and spiritual illnesses, administer birth or death rituals, mitigate the effects of witches and they narrate cosmology, history and myths of their tradition.

Though, Ka-Mbili is currently immersed in radio broadcasting as a Talk Show host and producer of “No Questions Asked-Izigqi Zezizwe” in New York, he continues to work extensively as a dance and African culture teacher with New York City schools, and still tours with JUXTAPOWER Inc., (www.juxtapower.org), a South African cultural song and dance production he established.

Ka-Mbili holds a Bachelor of Science degree from Empire State College in NY. He is a Masters Candidate for a Social-Public Policy degree at SUNY, and has recently written his first novel ‘ENIGOR and the Crystal Children” due to be published this year.