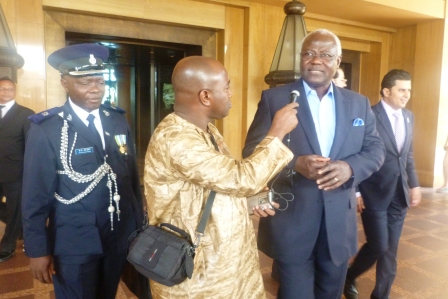 He was invited to the US alongside three other charismatic African Heads of State by President Barack Obama.  And in the UAE, he was invited by the Vice President and Prime Minister of the United Arab Emirates and Ruler of Dubai, His Highness Mohammed Bin Rashid Al Maktoum.

The visit of the President to the White House not only underpinned the strategic importance the American President places on building a partnership and substantive engagement with Sierra Leone, it also underscored the numerous successes President Ernest Bai Koroma has achieved in government since he became President in September 2007.

Well, after the visits, I had the opportunity to have a snap interview with President Koroma in Dubai when boarding his official vehicle on his way to Sierra Leone. I had wanted to actually have a lengthy or marathon interview with him, but I had limited time to conduct the interview because of the many official engagements he (the President) had in the Emirates.

The world’s eyes on Sierra Leone

In my brief interview with His Excellency, I asked him to tell me about his visit to the White House upon the invitation of the world’s most powerful leader, President Barack Obama.

Commenting on his visit, President Koroma said: “My visit to the United States was very successful. When you are running a transparent country, the world watches you; when the economy is growing, the world watches you. The world is watching me because of my outstanding performance in democratic governance, respect for the rule of law and fundamental human rights, and the economic, political and social development of my country”.

Though President Koroma did not dilate on the various issues that were discussed at the White House with President Obama, he believes that his invitation by the US President will help strengthen bilateral relations between the two countries, and convince other western economies to have confidence in his leadership.

Sierra Leoneans should be proud of their leader

While congratulating President Koroma for being recognized by President Obama for his remarkable achievement in governing Sierra Leone for the past five years, I think Sierra Leoneans should also be proud of having a President whose commitment to good governance, economic governance, transparency and accountability, human rights and the rule of law, development and other tenets of democracy have brought him and Sierra Leone more international recognition. This clearly indicates the successful implementation of his “Agenda for Change” which focused on energy, infrastructure, health, education, agriculture, private sector development and public sector reform.

I believe President Koroma belongs to a new generation of African Leaders who accept responsibility for resolving the problems of their peoples, to make way for economic development. As a democratically elected President, he is always ready to submit himself to the tenets of democracy which he believes are the unlocking key to national development. When asked about the UAE visit, the soft-spoken President described it again as “very successful”.

President Koroma’s visit to the UAE en route to Sierra Leone was another success story as it was meant to strengthen bilateral relations between the two countries, having been impressed with the remarkable achievement of our President.

Although most the meetings in the UAE were held in closed doors, an Aide to the President told me that the President had laid emphasis for assistance from the Emiratis for the improvement of much-needed electricity in Sierra Leone.

But with such confidence the world now has in our President, every Sierra Leonean must be hopeful for the successful implementation of the “Agenda for Prosperity” – the President’s blueprint for his second term of office.

The truth is, we are achieving real economic progress in Sierra Leone, thanks to the shrewd, honest and charismatic leadership of President Koroma, whose outstanding performance or impressive record on human rights, good governance; private sector development and economic governance have started attracting the attention of the world, with the United States taking the lead.

For many decades Sierra Leone had been at the bottom of the UN Human Development Index (HDI). The country had the highest Child and Maternal Mortality in the entire world. Sierra Leone remained in that ugly position on the HDI until erstwhile President Alhaji Ahmad Tejan Kabbah retired from office following the end of his second term in 2007.

When President Dr. Ernest Bai Koroma acceded to office in September 2007, one of his priorities was to improve health service delivery in the entire country to ensure that child and maternal mortality were reduced by 60% by 2015 in line with Goals 4 and 5 of the Millennium Development Goals (MDGs), which relate to income poverty and its social manifestations.

By 27th April 2010, on Independence Day, President Dr. Ernest Bai Koroma had launched nationwide the Free Healthcare Initiative for pregnant women, lactating mothers and under-five year old children. The last three years have witnessed a drastic reduction of child and maternal mortality in Sierra Leone, which was notable for the highest ratio in the world.

Since 2010, Sierra Leone has moved very rapidly from the bottom of the HDI to a respectable position because the indicators looked at by the UNDP for ranking countries are gradually improving through the commitment of the Koroma-led administration to improve the health sector, accelerate economic growth, embark on development and create job opportunities for Sierra Leoneans.

I also asked the President to express his feelings about Sierra Leone’s continuous rise on the HDI, particularly for last year which rose to seven places from the bottom.  President Dr. Ernest Bai Koroma said: “I feel fulfilled because there were promises I made during my first presidential campaign. So realizing the promises at the time when I’m still in office is a great fulfillment of my dreams”.

The President believes that the country has made tremendous efforts to meet the relevant benchmarks required for much improvement on the HDI.  Hear him again: “It is good for a nation moving from war to prosperity and these are all indicators that we must get there with concerted efforts.”

President Koroma has achieved in fulfilling his promise to dramatically reduce child and maternal mortality in Sierra Leone.  This and other numerous achievements his government has made in five years has encouraged the international community to have more confidence in his leadership as evidenced by his recent invitation to the United States of America by President Barack Obama alongside three other eminent African Heads of state.

May 3rd for APC Convention - Emerg...