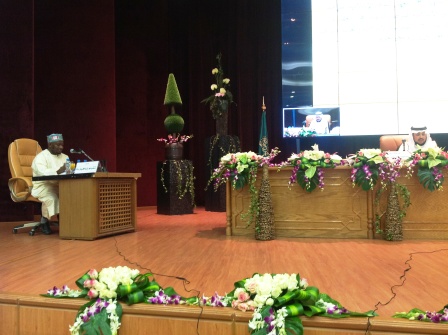 A Sierra Leonean Islamic academic intellectual at the prestigious Islamic University of Medina on Wednesday, 20th March, 2013 defended his PHD on “Problems of Islamic Education in West Africa and Ways to Remedy Them, Sierra Leone and Guinea – Conakry as a case study” as his doctoral thesis.  (Dr. Chernor Ibrahim Bah defending his thesis)

Dr. Chernor Ibrahim Bah is the first Sierra Leonean student from the Islamic University to be awarded with a PHD First Class Honours Degree in Islamic Education many decades after several Sierra Leoneans had passed through the University.

“On behalf of all Sierra Leonean students in this University, I would like to honour these leaders for their tireless efforts towards Islam and for making available the resources to educate Muslim children all around the world about the true meaning of Islam.” Islam, the erudite Doctor added, is now a glowing light for the entire world and it has reached the farthest region in Africa, including the West African State of Sierra Leone.

He also thanked the administration of the Islamic University of “Al-Madinatu Al-Munawarah,” for according him the opportunity to attain the highest level of University education.

The committee, comprising Dr. Abdul Rahman Bin Abdallah Zaid, (External Examiner) Professor Mohamed Bin Yousuf Afifi (Chairman and Supervisor) and Professor Muhammad Bin Falih Mukhamisi (Internal Examiner) were the three who discussed the PHD thesis of  Dr. Bah. The discussions lasted for about three hours before the PHD was conferred on him.

Born in the eastern town of Buedu in the Kailahun District, Doctor Bah attended the Government Secondary School in Kenema where he completed his sixth form and Badrudeen Islamic School, Kenema before he came to Saudi Arabia to study Islamic Education. He holds Bachelor’s Degree in Theology and Islamic Propagation and Masters Degree in Islamic Pedagogy.

Other Sierra Leonean Graduates of the University

The Sierra Leone Ambassador to Saudi Arabia, H.E Wusu Munu was deputized at the convocation ceremony by the Information Attaché, M.B Jalloh accompanied by the Accounts Clerk, Mr. Abdul Rahman Jalloh to cheer up their national for his exemplary academic performance.

Diplomats from other African Missions, Sierra Leonean nationals, Lecturers and students that graced the ceremony expressed feeling of great happiness and excitement at seeing representatives from the Embassy supporting their national at such a glorious occasion.

“Agenda for Prosperity” sold to students

Meanwhile, the Sierra Leone Embassy used the occasion as an opportunity to market His Excellency the President Dr. Ernest Bai Koroma’s “Agenda for Prosperity” to the Sierra Leonean students, who expressed much confidence and trust in the President’s administration and commended it for its developmental strides over the last five years.

Their views were full of optimism for a brighter Sierra Leone under the dynamic and dedicated leadership of President Dr. Ernest Bai Koroma.

On behalf of the Ambassador, the Attaché also used the opportunity to thank the Sierra Leonean student body in Saudi Arabia for the role it played during last year’s Haj and encouraged them to do the same in this year’s Haj.

Explaining the good aspect of the Embassy’s representation at the convocation ceremony, the Secretary General of the Students Union, Mohamed Sahid Badamasi said:  “We are happy to see officials of our government at this ceremony. Such positive attitude will encourage us to believe that our government cares for us wherever we are on earth.” 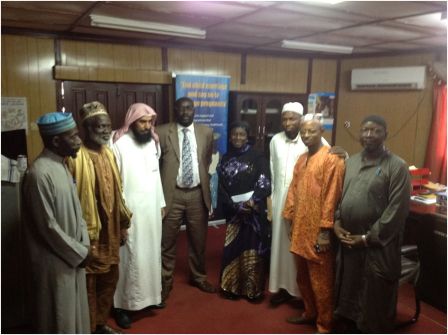