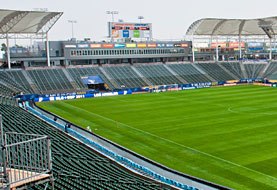 Residents of York Rural District on Sunday joyfully received news at a general meeting that plans are underway for the construction of a mini stadium for the benefit of sports lovers and the district at large.

Revealing the mini stadium news, York stakeholder and developer, Sylvester Babatunde Pratt who serves in the Ministry of Lands and Country Planning of Sierra Leone informed the large audience that he had approached the Minister of Sports, Mr. Paul Kamara to assist in the planning for the proposed stadium. According to him, the minister promised to cooperate with them over the stadium project and the minister has reportedly expressed that the project could be funded as part of government’s stride to promote sports in the country.

Mr. Pratt employed the residents to whole-heartedly cooperate to ensure that the mini stadium project becomes fruitful, stressing that the entire York District lacks a football field or recreation centre.

Demonstrating his willingness towards the mini stadium project, Mr. Pratt donated the sum of five hundred thousand Leones for the purpose of brushing the site for the erection of the mini stadium.  However, Mr. Pratt expressed the need for other community projects and he said he would bring income to spend towards the development of the entire district.

Sylvester Pratt also presented the sum of One Million Leones for the construction of a community boat whose income could be utilized towards the development of the entire district.

On the issue of lawlessness and indiscipline, York’s God-father Mr. Pratt, as acclaimed by the youths, condemned the rampant use of abusive language in the district. He said there is need for York to take a u-turn and restore itself to its past glory. He maintained that if the Agenda for Prosperity is to be actualized in that rural district, people have to accept discipline, which he concluded is an engine for development.