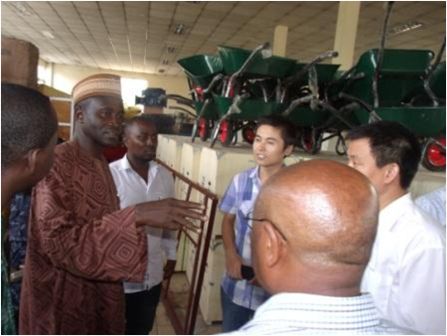 The day’s visit was in line with the APC  led Government of Dr. Ernest Bai Koroma’s vision to ensure that the Agenda for Prosperity becomes a reality.

Speaking during the visit at the Sierra Leone Guoji Investment and Development Company Ltd., at Cline Town, Hon. Alhaji Usman Boie Kamara noted that the Government’s dream for the people of this nation has no tribal or regional barrier or discrimination.

He noted that the Government is prepared to create the enabling environment for investors and at the same time, create job opportunities for Sierra Leonean youths so as to ensure that they are useful in society and are able to take active parts in championing national development.

Hon. Alhaji Usman Boie Kamara encouraged the Guoji Management to always work within the framework of the law and to ensure all Sierra Leonean citizens are treated fairly.

He further encouraged the Guoji Investment Company to take community leadership role in ensuring that they meet their social, corporate responsibility in the community they operate.

The Minister further encouraged them to embark on future expansion if they so desire. He however called on the company to forward to the Ministry their agreement with government to ensure that all operations are in line with government’s trade policy.

In his contribution, the Acting General Manager Sierra Leone Guoji Investment and Development Company Ltd., Mr. Fu Quan Hui said he was very happy to receive the Trade Minister and delegation. Mr. Hui expressed thanks and appreciation to the Minister for the visit and for his advice for an expansion of their operations. In this regard, he confessed that the company is looking forward to acquiring a bigger land space, at least 100 acres in order to expand their operations.

The Acting General Manager went on to disclose that over 300 Sierra Leoneans and some 40 Chinese are currently working with the company.

After fruitful discussions with the Guogi Investment and Development Company, the Minister and delegation left for SLCRG.  At SLCRG, the Director of the company, Basim Mohamed said very soon the company’s operations will kick start.

He confirmed that the project is a joint investment in which the Government of Sierra Leone and SLCRG have 20% and 80% shares respectively. The project, he further disclosed, is worth US$35 Million, adding that when the project finally kick starts in May 2014 it will have a capacity of 35,000 barrels per day and 150,000 tons of refined product to be produced in every month. The company, he furthered will also help in enhancing the President’ Agenda for Prosperity as it will create more job opportunities for Sierra Leonean youths.

Other officials that were part of the delegation included the Permanent Secretary, Ministry of Trade, Sana Marah, the Chief Director, Mr. Ahmed Aka Ahmed, and a senior official from the Petroleum Industry, Mr. Dan Mayson, among others.