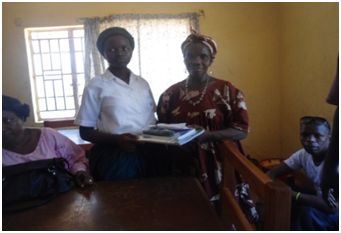 Four girls child who are attending the United Muslim Association Secondary School, Freetown (UMASS) on Tuesday 5th March 2013 benefited from a Sierra Leonean based organization based in Holland, The Netherlands known as Sierra Leone Patriotic Organization (SALPO) scholarship in Freetown.  (Photo: One of the beneficiaries & parent )

In his welcoming address the vice principle of UMASS, S.I. Kamara thanked all present and the pleaded to the donors for their continued support to the school.

Delivering the items the country representative who also doubles as the regional coordinator of National HIV/AIDS Secretariat east Mohamed M B Sisay said that it was after his return from the USA that his guys who are based in Holland told him about their plans and told him to come to the school and select  four girls of the UMASS whose parents are finding it very difficult to pay their school fees and other school charges.

Sisay reiterated that the scholarship scheme included a year’s school fees, text books, exercise books, school uniform among others which was transformed in cash (Le450,000) adding that this is the pilot face of the program as it will be improve in years to come based on the performance of the girls which they are starting with, and called on the beneficiaries to make good use of the opportunities given to them.

Receiving the items the principle of UMASS, Freetown, Mohamed Quee said that the school was established at Fourth Street with the aim of improving on the education of Islamic children and that the school has been benefiting from the government of Sierra Leone since 2007 and that the scholarship scheme started like a joke but thank God that it has materialized and called on the donors to continue the good work they have started.

The guiding councilor of UMASS, Katu Smith, said that the selection was not only based on poverty but was also based on academic performance and good behavior in school.

Delivering the vote of thanks, one of the parents of the beneficiaries, Henry Kamara, thanked the donors noting that they have lost their mother and father and that his sister only survives  on his daily sales and now that his sister is getting this chance, he will encourage her to make good use of the scholarship.

No Salary; No School… Teachers Pro...