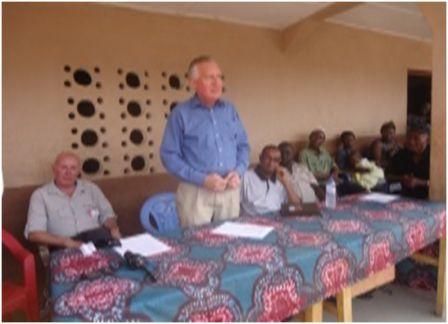 Rt. Hon Peter Hain was a Minister in the Tony Blair government for twelve years, including the portfolio of Minister of African Affairs. He was very instrumental in sending British troops to rescue Sierra Leone during the war period. He visited the country at that time and met with President Kabbah and his senior Ministers. Rt Hon Peter Hain was an anti-apartheid activist especially in the 1960s and 1970s as a student in UK.

Rt Hon Peter Hain was interested in Cluff Gold SL operations and their social programmes. During his one-day visit he was taken on a conducted tour of the company facilities and visited the towns adjacent to the company.

Rt. Hon Peter Hain was guest of honour and was asked to formally open the “Baomahun Christian Community School”.  This is a primary school that was built for the locality and has 400 pupils from Class one to six. The school has still not been recognized by Government and Cluff Gold is giving an allowance every month to every teacher.  Furniture and blackboards were provided by the company.

The Town Chief, Mr. Joseph Kowa, was very grateful for the assistance given by the company. This, he opined, was mainly because there was a cordial relationship between the company and the community. He realized that the company has not yet started exporting Gold and hence was thankful, on behalf of his people, for the company’s assistance.

The Town Chief also narrated some of the challenges faced by the community including poor sanitation, need for more water-wells, no electricity and no mobile phone coverage.

The Executive Chairman, Mr. John McGloin, appreciated the cordial working relationship between the company and the community. He disclosed that soon the company will move into its next phase, which is the construction phase. There will be lots of jobs and the local community will be given priority and more will be done for the community as the company progresses, Mr. McGloin promised the audience.

The Country Manager, Alusine Jalloh, said he has heard the challenges facing the Baomahun community. He is a man known for making only promises that he can keep. Thus the company will work closely with the development committee and identify the key projects that could be tackled as soon as possible.

The Guest of Honour, Rt. Hon Peter Hain informed the pupils and teachers that he was born in Africa but his parents moved to UK when he was a boy because of an unjust system in his country of birth. He thus has Africa close to his heart. One of the contributing reasons that he rose up to the level of a cabinet minister in one of the most advanced countries (UK) in the world was because he stayed focus in school and got educated. He therefore advised the school pupils to study their mathematics, English Language, History and other subjects. He thanked the teachers for performing so well and cheerfully under very challenging conditions.

He then formally opened the school.

Rt. Hon Peter Hain and Mr. John McGloin had very interactive sessions with the teachers and pupils after the official opening ceremony.

Whilst in Freetown, Rt. Hon Peter Hain and the Amara (Cluff) Mining team met with senior government Ministers and officials, UK High Commission in Sierra Leone staff  and the Chairman of the British Chamber of Commerce in Sierra Leone, Mr. Clive Dawson.

Who Is The Most Valuable Player In...