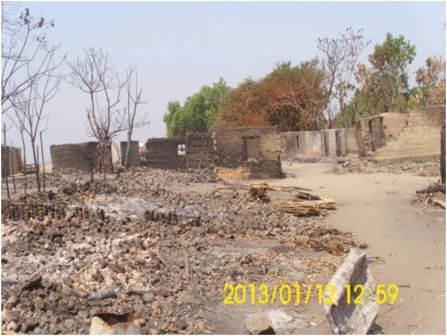 The people of Robegn Village in the Lokomasama Chiefdom, Port Loko District are currently in desperate need of support from the government and humanitarian organization. Not until the intervention of African Minerals Company, over three hundred people (including women and children) were spending the night on a sandy floor as a mysterious fire from a cotton tree destroyed about fifty houses in the river rind  village.  (Photo: Houses destroyed at Robegn Village)

Properties worth millions of Leones were destroyed, including fishing nets, outboard engines, shops and other materials used by mostly women to smoke fish.

Since the incident occurred on 4th January 2013 at 12 noon, African Minerals happens to be the first company to come to the rescue of the displaced people. The company donated 50 bags of rice, 50 bundles of zinc, and 50 bundles of emergency plastic sheeting; making a total cost of Le45 million.

Musa Alie Bangura is the company’s Social Community Manager.  He expressed his heartfelt sympathy on behalf of his Executive Chairman, Moseray Fadika and other Managers and Staff of the company; to those that have lost their properties as a result of the fire disaster. He noted that even though the village is not part of their operational area, but rather the company has sympathy for those faced with disasters across the 149 chiefdoms in the country. The company, he said lay premium on its corporate social responsibility, which it is coming to the aid of the people of Robegn Village. “We cannot provide all properties lost, but we pray that the Almighty Allah continues to reward you and comfort you,” he said.

Honorable Binneh Bangura of Constituency 55 said though the event was a sad one,  they are happy to have African Minerals as the first entity to support the people. He promised that the company is willing to provide more support in the near future. The Member of Parliament recalled that African Minerals has provided support in the chiefdom, which has effected lots of positive development. He assured of President Koroma and government’s support as a facelift to the affected people.

Presenting the items to the village, African Minerals’ Special Assistant to the Executive Chairman, Neima Macfoy emphasized that the donated items are meant for the affected people, and added that the people must be united at all times for more development to reach them.

Paramount Chief Baimaro Lamina Angbathor II of Lokomasama Chiefdom commended the Member of Parliament, Hon. Binneh Bangura for his leadership skills, which has rewarded the people in the river rind village. “I am very proud of the fact that most of the top guns at African Minerals are from my Chiefdom,” he said, and further note that he is happy to be part of a ten man team that will oversee employment opportunities for his people in African Minerals.

However, other school of thought has it that the unfortunate incident was as a result of the people failing to offer sacrifice to the spirit (devil), which has threatened that if the people refuse to meet their traditional obligation more disaster will ensue. The Paramount Chief advised that the people must be ready to offer a black cow as sacrifice, and promised that he will bring traditional specialists that will communicate with the spirit.

Floods: Stemming the tide in West...