Luton Junior School in the United Kingdom has donated school learning materials and equipment to the less-privileged children in Sierra Leone through a youth led organization named Concern for Future Generation Foundation (CFFGF) in Sierra Leone.

Speaking to this press the founder of CFFGF, Mohamed Serry-Kamal said the donations from Luton Junior School in the UK is part of a support initiative aimed to promote learning among children in Sierra Leone, especially those categorized as orphans and children between the ages of 5-15 years.

Serry-Kamara continued that the donated items will be distributed through CFFGF community coordinators in Western Area Urban, adding that one school Jey-Hey Preparatory School at Wilberforce Loop Community has already received its donation.  Another beneficiary will be Medgarene Primary School at the Joshua Community, Wellington, East of Freetown.

Explaining further, CFFGF Coordinator Mohamed Serry-Kamal stated that the relationship with Luton Junior School came about through a Sierra Leonean couple, Omega and Irene Davies who reside in the UK, who said it was initiated immediately after the end of the 11 years civil war in Sierra Leone.

He continued that the donation was facilitated through the Assistant Head Teacher at Luton Junior School, Mrs. Carole Juniper in November 2011, and they have been able to actualize their promise.

Both CFFGF and Luton Junior School have both promised continue to work together on their relationship and initiative. 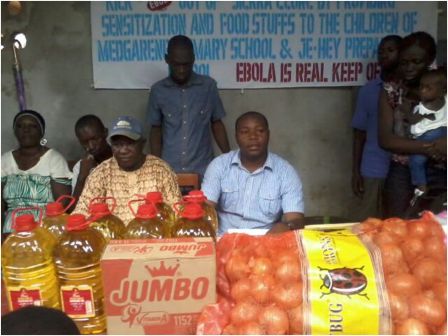