AFRC Leaders Found Guilty of Contempt, Interfering in the Administration of Justice

AFRC Leaders Found Guilty of Contempt, Interfering in the Administration of Justice

Three senior members of Sierra Leone’s former Armed Forces Revolutionary Council (AFRC), two of them already serving sentences on convictions by the Special Court, have been found guilty of contempt for tampering with a former prosecution witness.

The judgement was delivered today by Special Court Judge Justice Teresa Doherty from The Hague and streamed to courtrooms in Freetown and Kigali, Rwanda on a three-way VTC video link.

Santigie Borbor Kanu (aka: “Five-Five”) and Hassan Papa Bangura (aka: “Bomblast”) were each found guilty on two counts of interfering with the administration of justice by offering a bribe to a witness, and for otherwise attempting to induce a witness to recant (or to state that he testified falsely) testimony he gave before the Special Court.

Ibrahim Bazzy Kamara was convicted for attempting to induce a witness to recant his testimony. He was found not guilty on a second count, of offering a bribe to a witness. Kamara was also convicted on a third count of knowingly violating a court order protecting the identity of a witness who had testified against him in the AFRC trial.

A fourth Accused, Samuel Kargbo (aka: “Sammy Ragga”) pleaded guilty at his initial appearance in July 2011 and was convicted on both counts. He subsequently testified for the prosecution. Kargbo remains free on bail on his own recognizance pending sentencing. He appeared in Court for today’s judgement.

During the trial which opened on 16 June, Justice Doherty heard testimony in both Freetown and Kigali.

Kamara and Kanu are currently serving sentences of 45 and 50 years, respectively, at the Mpanga Prison in Rwanda on convictions for war crimes and crimes against humanity. Kamara and Kanu attended the hearings at the ICTR’s courtroom in Kigali, while Bangura and Kargbo participated from the Special Court’s courthouse in Freetown. The two courtrooms were connected by VTC video link. Kamara and Bangura each testified in their own defence. Kanu also testified in his own behalf and called one additional defence witness.

Under Rule 77(G) of the Special Court’s Rules of Procedure and Evidence, a person convicted of contempt faces a maximum sentence of seven years in prison, a maximum fine of two million leones (approximately $500), or both. In May 2012 the maximum fine was increased to twenty million leones, to apply to any future cases.

Convicted persons have the right to appeal both judgement and sentence.

In June, former Revolutionary United Front (RUF) member Eric Koi Senessie was sentenced to a two year prison term after being found guilty of interfering with five prosecution witnesses who testified in the Taylor trial. 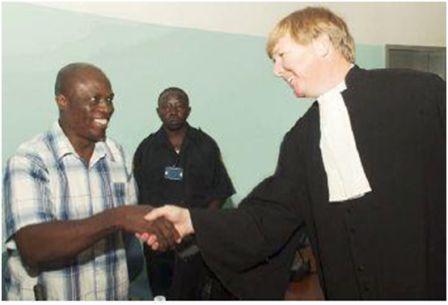