Homepages
Your trusted place for Sierra Leone and global news
Trending News
HomePoliticsNDA: Now that a leader is recognized…

NDA: Now that a leader is recognized… 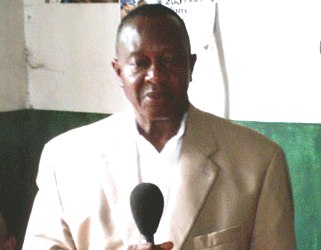 NDA: Now that a leader is recognized…

The founding father, leader, and former standard bearer of the National Democratic Alliance (NDA), Alhaji Amadu Mohamed Boiye Jalloh (in photo) has endorsed veteran politician Alhaji Wurrie Musidal Jalloh as flag-bearer of the party, ending a row between the claimant Mohamed Pateh-Bah for the flag-bearer position and the recognized Musidal.

There is freak in the NDA and buoying thoughts are varying since the party’s constitution is silent on a myriad of issues – such as the non-eligibility and expulsion of members, and the right for individuals to contest for executive positions. The NDA is such a party that gives – the democratic extents, a free will and those who become members upon completing all requirements are having as well the right to share and partake in all processes and activities of that party.

Why it has to take the recognition of the founding father of the party over a candidate tells there was some level of unsteadiness –if you like call it intra party feud. This fine voice of opposition of late begun to win the admiration of the masses of the land and if they must continue in that safe direction they have to listen to some salient voices such as the one that has spoken; because it took Alhaji MB Jalloh and his working team 15 good years to establish the structure that has today become the opposition voice in the land.

In the build up to the September 7-9 scheduled delegates’ conference for the eastern town of Kenema, dozens of diatribes surfaced. Trades of allegations were rife over who solicited funds from the ruling system to aid a run of alliance in a possible run-off situation; supposedly in the forthcoming November 17 multinational elections. On the other hand, another candidate was suspected of being a surrogate of the opposition to actualize a similar goal. The stand in, in the whole show depicts conflict of interest in representing the three political interests.

The delegates’ conference in Kenema was called off by the executive arm of the party amidst claims of possible boiling tension between the followership of Mohamed Pateh-Bah and those loyal to Alhaji Wurrie Musidal Jalloh. Claims were made –how Mohamed Pateh-Bah was escorted by scores of drunken non-party members and a consignment of police personnel allegedly to disrupt the peaceful conduct of the delegates’ conference. Mohamed Pateh-Bah claimed to have been endorsed by a total of 350 delegates across the regions housed in Kenema for the purpose and branded himself the new flag-bearer of the National Democratic Alliance.

A few moments after Pateh-Bah had done such, a caucus comprising 84 delegates moved a motion in a midnight convention at the Changes International Complex Kissy to endorse Alhaji Wurrie Musidal Jalloh as the flag bearer. There was a number of hundred member deficit of the NDA from those who allegedly endorsed Pateh-Bah and they were supposed to form a bulk of four hundred and fifty  delegates in the overall national conference. The 84 members who took the decision of endorsing Alhaji Wurrie Musidal Jalloh would not have formed a quorum if the number mathematics was considered. 5.36, significant figures were the decimal percentage of the total turnout of this legal convention which in other words is less than 1/3 majority of democrats that took the decision. This result fails to reconcile the difference as two persons are now sharing equal claims of being flagbearers of a single party.

The constitutionality of the two authorities in the views of Pateh-Bah is being put into test. He announced last week in a press briefing that he was going to seek the court of the land to interpret the limit of their constitution, which for all he knows has no legal provision supporting the current decision by the executive members of the party to expel him from the NDA.

Pateh-Bah is here challenging his expulsion from the party a move he described as criminal tendency to eliminate and deny him his democratic and constitutional right to partake and exercise his franchise under the NDA ticket.

Contrast to views of cross sections of party members, Pateh-Bah is an impostor following his denouncement from the party. The interesting note in the song is that both Pateh-Bah and Alhaji Wurrie Musidal Jalloh are having loyal followers, which to a certain extent has succeeded in making the NDA a party of two halves of a full membership support.

If it remains like this the party will miss it chance to partake in the November 17 elections in the face of any legal injunction by either the court or the Political Parties Registration Commission, which has the mandate to register, regulate and monitor the conduct of political parties in the land.

The bottom line is for the factions to mend the differences and save the party the embarrassment of being disunited in eyes of the public.