The Sierra Leonean international returned to the Swedish top flight three weeks ago after a torrid spell at Scottish champions Celtic.

He arrived in Scotland in August last year but injuries limited his contributions on the pitch.

The 23-year-old striker’s 16 appearances, mostly from the bench, did not yield a single goal.

But Bangura told sierraleonefootball.com that moving back to the club where he made his name will help him to bounce back.

“I have no regrets but I was disappointed at not playing because of injuries,” he said.

“Not being able to play was really hard. It was hurting me, it was not fun, but that’s life.”

Bangura, who scored his first goal for over a year in AIK Solna’s victory over Djurgården last weekend, is hoping to go back to Celtic a stronger character.

“I’ll be a better player and ready to fight for a place when I go back to Celtic.” 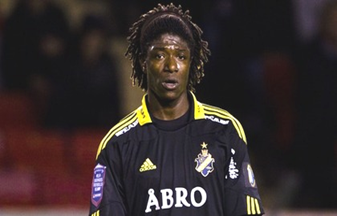