Homepages
Your trusted place for Sierra Leone and global news
Trending News
HomeEditorial“70%-75% of the new Mining Act is good for Sierra Leone, but implementation is the problem”… says Lawyer Pa-Momo Fofanah

“70%-75% of the new Mining Act is good for Sierra Leone, but implementation is the problem”… says Lawyer Pa-Momo Fofanah

“70%-75% of the new Mining Act is good for Sierra Leone, but implementation is the problem”… says Lawyer Pa-Momo Fofanah

Prominent Freetown Lawyer, Mohamed Pa-Momo Fofanah, stated at a two-day training workshop on the impact of Sierra Rutile mining in Bonthe and Moyamba Districts and the new mining act that ended over the weekend at Panguma in the rutile mines, southern Sierra Leone, that “The new mining act is good for Sierra Leone, but implementation is the problem”.

Organized by the Children’s Welfare and Community Development Programme (CWADEP) with support from ENCISS, the workshop, with the theme ‘popularization of Sierra Rutile current mining policies agreement and the constructive contribution on the proposed mining act’, brought together various stakeholders.

Among the issues deliberated upon were the corporate social responsibilities of Sierra Rutile Limited, the roles of the government, chiefs, local councils and the civil society in bringing about the much needed reforms in the mining sector and the legal implications of the current mining policies, agreements and the new mining act.

Speaking at the opening ceremony, the Programme Director of CWADEP, Joseph Hazley, said “We are holding this workshop to take a critical look at the new mining act to see whether it reflects the wishes of the people by bringing to light its merits and demerits”. This he said is important as the said act touches on the lives of the people and children yet unborn.

According to Mr. Hazley, the people affected by the operations of Sierra Rutile Limited have been at the receiving end for years, adding that a new and welcoming mining act should be one that will guaranty the general enjoyment of the country’s vast mineral wealth.

He described the general rutile mining area as deplorable, saying there is a huge class gap between the corporate employees who he said are living in affluence, and the indigenes of the land who he noted have to contend with the excesses of the company.

He disclosed plans by his organization to hire experts to conduct a scientific research to ascertain whether the quality of air and water at the rutile mines are safe enough to guaranty a conducive living environment for human beings. According to him, this is in line with reports that the general area has been severely polluted as a direct result of the unfriendly chemicals and other substances used by Sierra Rutile Limited in its mining operations.

Speaking earlier, the Chairman of the ceremony, Joseph Benya, who happens to be the former chairperson of the Bonthe District Council, likened life at the rutile mines to the animal farm situation, wherein the class distinction is so glaring that one begins to wonder whether the indigenes whose land is being exploited matter at all.

Thomas Sabbah, Chairman of the Landowners Federation and former councillor, described life at the rutile mines as horrible, saying the people are yet to benefit anything from the Sierra Rutile operations. He said the people are at risk of environmental problems such as land degradation and air and water pollution which he said comes as a direct effect of the unregulated dumping of waste by the company and creation of massive unprotected artificial lakes responsible for the frequent cases of drowning in the area.

He expressed disappointment over the way and manner in which their welfare issues are being handled by the company and the government, saying “we are living as strangers in our own land, without the right to be involved in negotiations before our fertile agricultural lands are leased out to the company”. He further expressed disappointment that the new mineral act failed to absolutely guaranty them as indigenes of the land their right to enjoy the vast wealth coming from the operations of the two giant mining companies operational in the general area.

Jose Mandela Kpanabom, the outspoken Youth Leader of Imperri Chiefdom, Bonthe District, said the presence of Sierra Rutile Limited in their locality has made life very difficult for them, noting that their fertile agricultural lands and traditional heritage sites have all been swept away by the company. “We are ashamed of being indigenes of a land that has produced millions of dollars worth of iron ore, bauxite and other associated minerals, and yet we are living in squalor and having to contend with dust left behind by speeding company vehicles. We will one day resort to violence if something is not done immediately to reverse the current unacceptable trend”.Â Â Â Â

Speaking on behalf of Sierra Rutile Limited, Anthony Smith-Sam, the company’s Community Development Officer, started by stating categorically that “the company is a business entity and not a humanitarian organization”. “The company has not come to do everything for the people; there are authorities or channels responsible for that. The company can only play its own part”, he went on.

He acknowledged the concerns raised by people affected by the operations of the company, pointing out that most of the problems grumbled about were inherited from the former management from whom the current one took over some few years ago. Since this new management took over the rutile mines few years ago, only two people have been affected by its relocation policy. “We are a responsible company”, he added.Â

He recalled the incident that led to the capsizing of Dredge Solondo, which he said affected the operations of the company severely, although for a short time. He therefore called on the people to exercise patience, saying the company will only commit itself fully towards meeting its corporate social responsibilities after January 2010, when it shall have commissioned its third dredge estimated at $25 million United States dollars and jumped into full scale operations.

Sierra Rutile Limited, Mr. Anthony Smith-Sam further noted, is a law abiding company that operates within the terms of its signed lease agreement with the Government of Sierra Leone, adding that the company’s environmental and developmental policies are in tune with the development aspirations of the country.

He maintained that the company is contributing immensely to the economy of the country by paying all its royalties and taxes amounting to thousands of United States dollars on a timely manner, adding that out of the one thousand one hundred and forty-three full-time employees the company has, three hundred are indigenes of the mining localities within the Moyamba and Bonthe Districts.

Commenting on the legal implications of the current mining policies, agreements and the new act, Freetown based renowned Barrister and Solicitor, Mohamed Pa-Momo Fofanah, said “The new act contains a lot of things in it that are good for the country, but the problem now lies with the implantation of the new changes”.

Lawyer Pa-Momo Fofanah made it clear that the act is yet to be passed into law, expressing hope that vital concerns raised by members of the public and civil society groups such as the one that has to do with the fact that the new act gives the minister of mineral resources and the director of mines too much unchecked powers, will be taken onboard for the good of the country.

He expressed disappointment that parliamentarians failed to factor in the welcoming recommendations made by the civil society into the amended act, stressing that “We are looking forward to a mining law that will be reflective of the wishes and aspirations of the ordinary people”.

At the end of the two-day deliberations, participants welcomed the new mines act, but urged that it be made more people friendly and followed up by strict implementation. While they seem not to be totally opposed to the continued operation of the company in their localities, they seem however desperate to enjoy essential facilities such as good roads, quality air and water, electricity, education, recreation and health care, most of which are lacking at the moment.Â Â Â Â 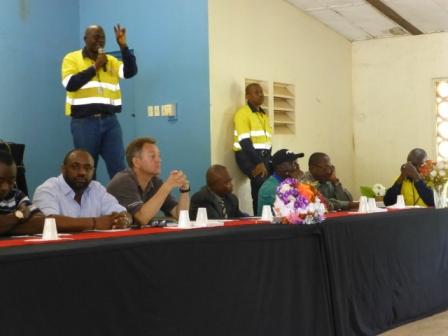 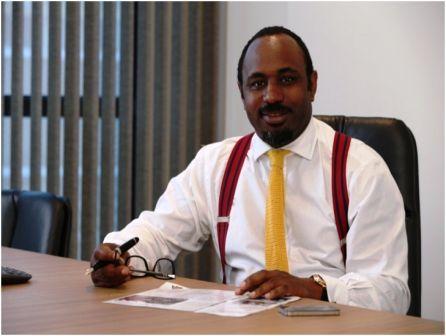