Saturday, July 21st marked another extraordinary day in Dallas, Texas for the All People’s Congress (APC), Dallas Chapter as it collaborated with the Diaspora Campaign Group (DCG) in a fundraising dance to further a worth course in Sierra Leone.

The two organizations, All Peoples Congress Social and Cultural group (APC/SC) and the Diaspora Campaign Group (DCG), whose primary goal is achieved through organizing and hosting successful fundraising event, did not skip a beat in putting together an event that symbolizes the radiance and sprightly illumination of the sun.

This highly successful event attracted the African Chambers of Commerce as well as politicians and professionals from other countries. The raison d’etre for the fundraising drive was to honor Ernest Bai Koroma, President of Sierra Leone, in his effort aimed at promoting democracy in the country.

The fundraiser climaxed series of events, one of which brought four West African countries to vie for the Dangawalli trophy. Cameroun, one of the tournament’s participating teams, won the trophy while Ghana were the runners-up. President of the Sierra Stars Soccer Association in Texas, Mr. Patrick Dangawalli – whom the tournament trophy was named after- presented the trophies to the winners.

Ambassador Bockarie Stevens, who was to be the guest of honor was unavoidably absent and was replaced by Zambian business investor, Dr. David Nana, president of Dana Holdings. The event was serenaded with notable men and women in the society: Curtis Wright, Managing Director, African Chambers of Commerce, Hon. Ebenezer Padilla, Minister of Commerce, Ghana to name a few. In his introduction, Patrick Jackson, former Mayor of Rowlett, Texas described these men “as business leaders who have what it takes to make significant investments in Sierra Leone”

In her remarks, Ms. Abibatu Daramy stressed the importance of maintaining the present momentum for president Koroma’s re-election. “We want to be part of the platform that will help the president’s election. We can do it together”

Mr. Mambu Koroma, President of the APC Dallas Chapter, reminded the audience about the progress Sierra Leone has made during the president’s 5 years in office. “To elect an inexperience leader will be a mistake. We must vote in President Koroma”

One notable highlight of the entire night was the speech made by Solomon Gembeh, a die-hard SLPP activist and the Secretary General, SLPP, Dallas chapter. Mr. Gembeh, who is well known for his – say it like you mean it swagger – could not have been far from the truth when he said this to the thunderous applause of the audience, “If President Ernest Koroma’s reelections for the second term in office is based on his effort in developing the country then so be it. If he wins, he deserves it” However, he was quick to make a cautionary note that despite the president’s tremendous strides “the APC should not forget that there is a very strong opposition in the contest as well”.

Mrs. Julian Daboh, a key figure in the APC Dallas Chapter, started the ball rolling when she gracefully introduced the MC’s of the night: Dr. Jesse Porter and Mrs. Fatmata Bundu-Conteh.

Pictorial highlights of the night 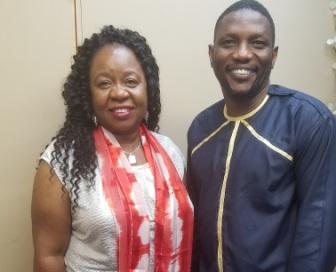 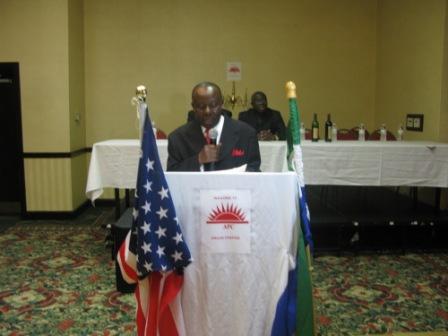