Sierra Leone’s Ambassador to the People’s Republic of China, His Excellency Abubakarr Multi-Kamara has called on Sierra Leonean students studying in China to “see the bigger picture in terms of what is happening today in Sierra Leone,” and above all  try “to contribute to the gains that have already been made in the country over the years”. He spoke on Tuesday, 22nd May during a courtesy call on him by a cross section of the Sierra Leonean Students Union in China.

According to Ambassador Multi-Kamara, students should be part of the process of restoring the confidence and dignity of the Sierra Leone Mission in China as he is of the view that his success depends on the support he gets from all stakeholders including students. “I cannot succeed without your (students) support. We should seek to work together to restore the confidence and dignity of the Mission here”, whilst also emphasizing his strong desire to enhance the well-being and conditions of Sierra Leonean students in the People’s Republic of China.

Speaking earlier, President for the Students Union, Alphajor Bah congratulated the Ambassador on his appointment, stating, “It does not only have to do with your competence, but also has to do with the trust and confidence that President Ernest Bai Koroma has in you,” and further saying, that with the wealth of experience of Ambassador Multi-Kamara the students are certain, that he will succeed in his new appointment.

Giving a background on the formation of the Sierra Leone Students Union in China, Bah said, it all started in 1999 when the idea came up and cautioned, that “the union is not a political organization but an academic union that seeks to promote the welfare of students and we will resist any attempt aimed at politicizing the union…” Bah said.

He expressed, on behalf of the students, their appreciation to the government of Sierra Leone for providing them with yearly allowances. “We are proud of the additional provision of a 40 feet container  to be used by graduating students to ship their belongings back home… we are yet to learn of any group of students having such facility here,” Bah said, further explaining that it used to be a problem  with students in the past”

Bah however raised a number of issues for the attention of the Ambassador including the issue of harmonization of the students coming from different categories to study in China and extension of period of study for some students.

Another issue that came up was an appeal for the continuous use of the Embassy Hall for the annual Students Convention as a way of making such an annual event be a real Sierra Leonean affair.

There was also an appeal from the Student Union Executive for an intervention of the Embassy in enabling students pay their annual dues to the union. On the need for harmonization, the President for the union, Alphajor Bah explained, that there are students who came directly from the Education Ministry, others through Foreign Ministry, the Chinese Embassy, whilst others apply directly to universities in China and others sponsoring their studies. He said, from these categories, only students from the Ministry of Education are receiving allowance from government. “We are kindly asking government to look at the possibility of harmonizing these students to see how others can also benefit.” He ended by pledging their total commitment and support to the new Ambassador.

Responding, Ambassador Multi-Kamara expressed his appreciation to the students for the visit. He told them that the concerns they raised were legitimate ones, this assuring them of his commitment and desire to “enhance the welfare and conditions of students here,” and that he will take the issues raised by the students “as priority issues” and promised to discuss them with the relevant authorities in Sierra Leone, especially the Ministry of Education, but cautioned that “the issue of harmonization of students’ allowance may not be as straightforward as many students perceive it”  and that the support of the relevant authorities in Beijing may equally be important to secure a lasting solution.

The Sierra Leone Government, the Ambassador said, is concerned about the welfare of students in China.

He called on students to look at potential opportunities that they can make use of in China especially in terms of enhancing their well-being.  As a sign of his interests and determination to promote the welfare and conditions of Sierra Leonean students studying in China, His Excellency Ambassador Abubakarr Multi-Kamara volunteered to be an honorary member of the student union body and this move was welcomed by the students, stating that it as a positive sign that indicates the Ambassador’s readiness to work in their interest and to give value to the union.

He also encouraged them to work with the embassy in promoting their welfare and interest.

Given the way he was able to address the issues raised by the students and commitment shown to work with them always, coupled with his clarion call on all students to be united, Ambassador Abubakarr Multi-Kamara was literally lifted shoulder high by the students who in return, promised to always give their support to him and the embassy.

Stay with Sierra Express Media. for your trusted place in news! 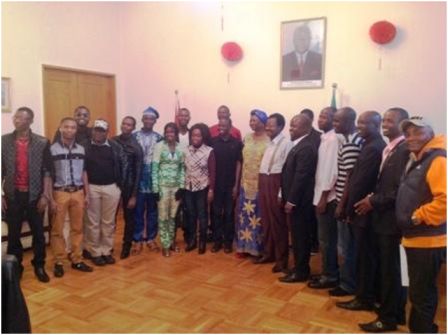