Special Assistant to the President on Social Affairs Sheka Kamara opened the meeting by giving a background to the events pre-dating the meeting. He noted that allegations about a 65,000 dollars given to Belgium Sellers by President Ernest Bai Koroma.

He noted that following a meeting held yesterday which took about three and half hours brought a lot of things to the fore as well as some clarifications made with respect to the alleged 65,000 dollars. The rumour, he said, was false…

Sheka Kamara also noted that the group is now speaking from the same page. Raymond Kowa John firstly apologised for the riotous conduct displayed by the Belgium sellers a few days ago. He expressed dissatisfaction over the attitude of some of the guys at Belgium that some 65,000 dollars was given to the Organization by President Koroma.

According to Mansion Bangura, the relationship between the Belgium sellers and the president dates as far back as opposition days. He mentioned that the president was very instrumental in the awarding of a symbol to one of them to contest in constituency 107.

He further noted that the president also awarded a Hajj scholarship to their Chief Imam to perform the pilgrimage to Mecca. He also mentioned that Haja Siminormoh was also sent on pilgrimage to Mecca. He noted that it was wrong for people to disseminate unfounded reports that the president had given money to them in order to create tension among the youths and other groups in the country.

Oseh Davies also reiterated their support for the president, adding that the president’s support base in Belgium is still over 95 percent.

Sarah Kamara, Chairlady Belgium Sellers, also in her own right apologised to the president for that unfortunate incident. She noted that may be the incident was a blessing for the imaginary money to come to light.

President Koroma noted that these are times when we should be cautious because there are people hell bent on fomenting trouble and creating disquiet in the country. He said that as a government the APC believes in the business sector . At times he wanted to visit them but the usually mamooth crowd would not allow him to have quiet discussions with the Belgium sellers.

According to President Koroma the business sector is a very formidable area in transforming the country. He noted that Belgium Sellers Organization is not the only Organization in the country as there are other groups seeking the same assistance from the government.

Any assistance to these groups must be shared among them all. He thanked the Belgium sellers for providing leadership as it is normally during crisis that leadership is put to the test. He assured them of his commitment to develop the business community. He maintained that he wanted to make more millionaires out of Sierra Leone businessmen and women.

He also maintained that the Minister of Trade would coordinate any assistance that would be given to them. President Koroma said that conditions will be created to promote and enhance medium businesses or small medium enterprises. He noted that his visits to Belgium were always intended to give the right impression among Sierra Leoneans that Belgium sellers are not insignificant to the development of the country.

He urged the minister of trade to facilitate and fast track efforts to help the Belgium sellers to do the right thing.

The Minister of Trade and Industry who gave the vote of thanks, informed President Koroma that moves have been made to engage the Belgium Sellers and the Sierra Leone Commercial Bank to look at their project without further delay. He noted that the interest rate on micro credits is very high, while assuring that the interest rate to be given to the traders this time round would be very low.

Cluff Gold chairman to step down 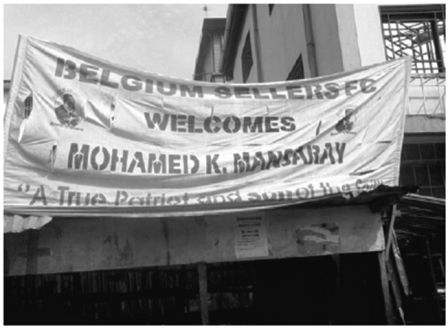