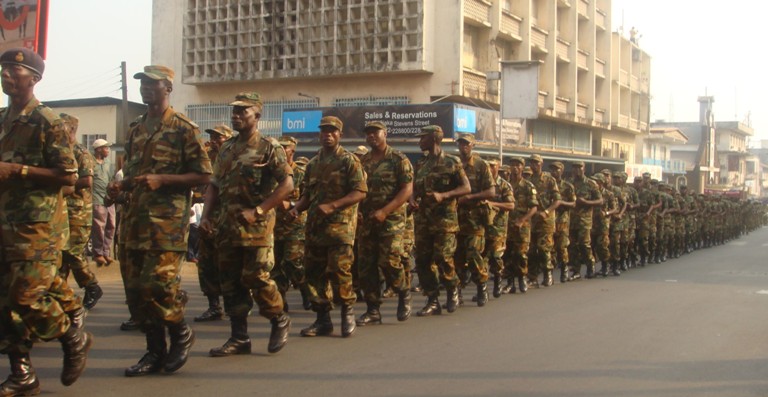 “If our money is not paid to us, we shall have no option but say to government that we are ‘soldiers and till death shall we be,” displeased and discontented war wounded soldiers blew their minds as they marched through streets of Freetown to lay their protest to the Human Rights Commission Wednesday 8th.

A total of 311 ex- soldiers (war wounded) Wednesday 8th converged at the Wilberforce Barracks drill square (Hockey pitch) and afterwards marched through the streets leading to the office of Human Rights Commission; chanting hurtful slogans and compelling government to pay benefits due and owed them or  they will have no choice, but unswervingly to cause disorder in society.

“We’ve complained to the Human Rights Commission and our case was looked into. It was recommended that the Army pay us our benefits,” Chairman of War Wounding soldiers Blamoh Jesse Jackson said.

“The Sierra Leone Army wants people see us as mixed-headed individuals; as people who make no good to society at all.”

The protesting soldiers said however that their families have abandoned them because they’ve had no money, and have been ruined and left penniless.

About 50 (war wounded) Saturday 10th continued the protest for their unpaid benefit.

They told our reporter that if their demands are not met, they will disorderly take to the street and cause unrest.

It could be recalled that in June of 2011, the Human Rights Commission set up a tribunal to look into complaint made by 311 war wounded soldiers.

The Commission, according to findings, ruled that government should pay benefits due all the ex-soldiers (war wounded) unrestrained, but up until now, not one is observed to have been paid his/her benefit at all.