The Sierra Leone Right to Food Network (SiLNoRF) has been launched at a remarkable occasion held on Tuesday 18th October 2011, at the Sierra Leone Library Board regional branch complex in Makeni.

Speaking at the ceremony which was chaired by Unisa P. Kamara (UPK) a lecturer at the University of Makeni, Focal Person of SiLNoRF Mohamed S. Conteh, said the network consists of various civil society groups and was established in 2009 after due consultation.

The main aim of the network which is part and parcel of the African Network on the Right to Food, Mr. Mohamed S. Conteh said, is to create a forum through which civil society activists can engage various stakeholders on issues relating to the full realization of the right to food.

Since its inception, Mr. Conteh pointed out that the network has embarked on a number of activities including engaging stakeholders and operatives of the Addax Bioenergy project in the Bombali and Tonkolili districts on issues bordering on the social needs of persons affected by the project, and the establishment of a national secretariat to take the process forward.

He said the network is currently focusing on creating awareness around the issue of right to food, strengthening the capacity of the secretariat, building the capacities of 12 land users’ organizations, ensuring that the grievances of the victims of the operations of Addax Bioenergy Limited are adequately addressed so as to prevent future conflicts over land, conducting monitoring activities and continuing stakeholders engagement.

SiLNoRF Focal Person Mr. Mohamed S. Conteh made it clear that the network is not against the operations of Addax Bioenergy Limited, but rather concerned about the upholding of the fundamental right of the people to food. Mr. Conteh ended by stating that if anything, the network is intended to make the Addax project work better by opposing the odds.

Speaking on behalf of Addax Bioenergy Limited, Dereck Higgo welcomed the formation of the network, noting that the company is business-based and is committed to ensuring that the rights of people affected by its operations are not violated.

He referred to the presence of the company in the country as a source of economic boost, stating that government derives funding from the operations of commercial companies such as Addax Bioenergy Limited.

According to him, the company has secured 100 per cent lease in certain areas within its concession, but said not all the land leased would be utilized. He added that in order to mitigate the effects of its operations on the food needs of the affected persons, the company has cultivated a total of 3,700 acres of rice farm across the affected communities for the sole use of the community people and expressed optimism that when harvested, the people affected will have enough food to eat.

Mr. Higgo also stated that the company has established a farmers’ feed school to teach local farmers on effective production skills and has been working in close collaboration with a civil society group called CSOPAD on matters relating to community engagement and welfare.

He debunked claims that Addax has promised to build social facilities such as schools and laying off local workers at random, arguing that the company is still in the preparatory stage and assured that when work starts in earnest the situation will change for the better and more permanent jobs would be created as well as the provision of certain social facilities like a vocational training centre.

Representatives from the affected communities, Zainab Kamara of Makarie Gbanti and Abu Bakarr Kanu of Malal Mara, expressed disappointment over the Addax Bioenergy project, saying their expectations have been dashed by the pollution of their traditional water sources by the company, the non-fulfilment of promises and the virtual taking over or drying up of their swamp lands where they used to do their farming. They also grumbled that Addax deals directly with government and local authorities, thereby sidelining them.

Also speaking at the ceremony were Chief Pa Alimamy Korongbo Sesay who represented the paramount chief of Malal Mara chiefdom and the Deputy Chairman of the Tonkolili District Council Madam Rugiatu Koroma, both of whom heaped praises on Addax Bioenergy Limited for what they referred to as the positive impacts the company has created in the areas of job provision and revenue generation, whilst describing the formation of SiLNoRF as a right step in the right direction.

For his part, the representative of the Bombali District Council Abdul Aziz Bangura, said he was sent to convey the message of the council that it fully recognizes and appreciates the work of the network and stand ready at all times to render support to the initiative.

Madam Isha Kanu-Moriba, representing the United Nations Peace Building Mission in Sierra Leone (UNIPSIL) at the ceremony, praised the network for targeting a specific campaign issue, and encouraged its members to be focused despite the opposition they might encounter. She implored Addax Bioenergy Limited to see the network as a partner rather than an opponent.

The ceremony was climaxed by the launching of SiLNoRF, a task performed by Joseph Pokawa, the Director of the Governance and Accountability Program of the Network Movement for Justice and Development (NMJD). 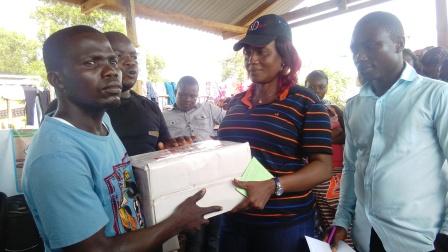