Heads of States, Government Ministers and other visiting officials were ferried to the Eagle Square in four heavily guarded Marcopolo luxurious buses, and placed in a much secured environment, 30 meters from the dais where their colleague took the oath of office.

President Goodluck Ebele Jonathan is the fourth democratically elected Government of the Federal Republic of Nigeria, since the return of Democracy twelve years ago.

The ceremony saw different people from the thirty six states of the Federal Republic of Nigeria in different shades of colour chanting slogans and singing in jubilation for Democracy in continuity in one of the most populous African states which fifty years of independence is dominated by military rule.

Soon after the swearing in ceremony, of His Excellency Goodluck Ebele Jonathan as President of the Federal Republic of Nigeria and Grand Commander of the Armed Forces, all the flags of the Country (Green – White – Green), colours of the  Armed Forces, (Air Force, Naval Wing and Army) were lowered and replaced by new one’s symbolizing a new political dispensation, ushered in by a 21-gun salute, followed by the performing of his first official duty by inspecting a Guard of honour mounted by the Guards Brigade.

During his inaugural speech, President Goodluck Ebele Jonathan said “the time of lamentation is over and I will never let you down”. He promised to restore efficient infrastructure, integrity in public institutions, Introduce Free education, continue the fight for improved medical care and called on defeated Presidential candidates to partner with him to push Nigeria forward.

Demonstrations of Air-might, Combat – Expertise and Naval Power formed highlight of the program.

Giileh nominated for Best Female A... 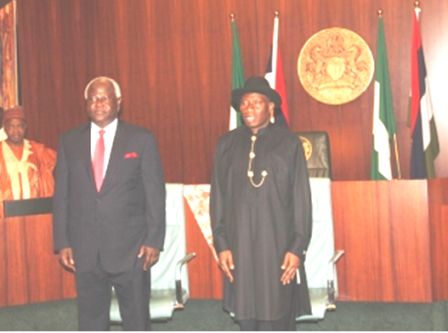