It may go without saying that Sierra Leone’s ability to take its rightful place in the global market place largely depends on its ability to nurture at the top, selfless leaders—leaders who not only have Sierra Leone’s interest at heart but also bold enough to put the greater good of the country ahead of their respective individual interests.  Such leadership machinery must have the ability to remain uncompromising in its quest for the true change that our country sorely needs.  The kind of change that effectively tackles social and economic challenges that stem from youth unemployment, corruption, nepotism, tribalism, cronyism and other limitations that continue to thwart our country’s development.  Such change must break through the fabric of what appears to be an institutionalized status quo that has for decades cultivated a breeding ground for bad governance and ultimately frustrated our county’s efforts in making desperately needed progress.  We cannot become what we dream of as a better country and people remaining what we are.  This is what is at stake in Sierra Leone politics.  (Photo: Mustapha S. Wai, author)

Quite recently in America, many were taken by surprise as history unfolded with a new dawn emerging from it the son of an African immigrant, Barak Obama not only the winner of the democratic primary but also the presidency of the United States.  But this historic victory did not come easily as critics dwelling on cynicism went at length to discredit a man destined to become the next American president.  First, he was dismissed as inexperienced; then the Jeremiah Wright saga; followed by the race card; then the allegation of him being born a Muslim who also attended a Madrasat during childhood in Indonesia, to name just a few.  One after the other, Obama survived those propaganda traps, while his popularity continued to grow as the clear front runner.  Obama’s real strength was his ability to stay above the fray and remain on course with his message of change cutting across age, gender, and racial boundaries.  Over time, the American people got tired of the cynicism and bickering.  What ultimately became important in the race was each candidate’s ability to gain the trust of voters as they attempted to address such issues as unemployment, the economy; war in Iraq, war on terror; healthcare; taxation, considered relevant in the race.

As Bio’s critics become more obsessed and irrational in their attacks against him, I am tempted to draw parallel between him and Obama.  Like Obama, Bio’s youthfulness comes with substantial goodwill; his support base is largely change-hungry youth and ordinary people; and the measure of his coolness and charisma has a personal appeal that leaves him as the indisputable front runner amongst the SLPP flag bearer candidates.  While Bio is far from been perfect, the young man appears to have convinced many voters across a wide range of demography including age, gender, and tribe;  that he has the right character, temperament as well as moral standing to lead our country.  He quietly remains consistent with his message of the new direction– a direction that envisions a Sierra Leone with equal opportunity for all regardless of age, gender, economic status, or tribal and/or personal affiliation.  The rising popularity of Bio despite what appears to be an unwarranted and negligible negative media campaign, serves as a testament to the level of confidence that the suffering masses may have in him.  Let me share with you my personal experience with Maada Bio, as I have come to know him from the very first day I met him.

It was in fall of 1999, when I first met Bio in the student’s cafeteria at American University in Washington DC.  The mild-mannered man quietly sat in the student lounge at Mary Graydon Center reading his book and sipping on his morning coffee as I approached him.  His smile was not only welcoming but presented him as an approachable character.  As a Sierra Leonean who had survived four months of atrocities behind Revolutionary United Front (RUF) rebel lines coupled with a period of five years in refugee camps in Liberia, I had my own fair share of blame to pass along.  As I sat next to Bio, I began to wonder about his role in the war, particularly as a member of the National Provisional Ruling Council (NPRC).  Evidently, I had my own stereotype about the man widely seen as a military leader at the time.

As we continued our conversation, Bio shared with me his experience as a junior officer in the Sierra Leone Army fighting in the frontline against RUF.  He spoke with a great sense of pride and came across as a man who risked his life to save others from the mayhem of the RUF.  Bio continued to describe his role as a peacekeeping soldier with the Sierra Leone Contingent of ECOMOG serving in Liberia.  As we discussed the activities of ECOMOG in Liberia, I realized that it was Bio’s contingent and others that helped save Monrovia and its environs from Charles Taylor’s NPFL attacks.  At that moment, it became clear to me that Bio was among those peacekeeping soldiers who had helped save my life as well as those of thousands of Liberians and Sierra Leonean refugees living in and around Monrovia at the time.

Having lived outside of Sierra Leone the entire period of the NPRC’s regime, I struggled to establish a position to judge Bio for his role during the NPRC era.  However, given my general opposition for coup d’état, I wanted to hear what Bio had to say about his role in the NPRC.  I was surprised to note the level of pride that Bio exhibited as he recounted his involvement in the NPRC starting with events leading to the coup d’état in 1992.   Sparing my readers all the details, Bio’s narrative quickly helped me get over my stereotype while leaving me with enough information to form an independent opinion about him.  The lack of political will and ability to prosecute the war, institutionalized corruption, intimidation of political opponents, zero tolerance for multi-party politics, were among the factors responsible for the deplorable state of governance at the time.  While I generally do not advocate coup d’état, many would agree that the state of our country’s governance structure was nothing to write home about at the time.  Even many of Bio’s current critics believed at the time that the change was overdue.  This, in fact, was evidenced by the overwhelming support for the NPRC coup d’état both locally and internationally.

During our conversation, I also wanted to know whether there was anything that Bio was proud of as his regime’s contribution to Sierra Leone.  Bio then took me through a brief journey citing specific tangible contributions of which he is proud.  The construction of the Waterloo/Masiaka highway cutting through the infamous Okra Hills; the prosecution of the rebel war to push rebels for the first time out of Sierra Leone in the fall of 1992; the facilitation of the first peace initiative with RUF; and more importantly the facilitation of the first multi-party elections in decades and the historic handover of power to a democratically elected president; as recounted by Bio are all noble achievements that in my view deserve merit.  In fact, at the time when most of Africa’s military leaders were trading military camouflage for civilian clothing to remain in power, Bio was courageous enough to facilitate elections in which he was not a candidate and subsequently handed over power to the elected president.  I find this to be the most honorable act by any leader of our time and in the history of Sierra Leone.  This noble act marked the beginning of the end of the civil war, paving way to the peace and multi-party democracy that Sierra Leone enjoys today. For this single act, I salute Bio.

While some of Bio’s critics appear to be driven by personal vendetta, others would like us to believe that the only thing that Bio and the NPRC should be remembered for is the execution of former All People’s Congress (APC) officials.  While they have a point, the blanket allegation is not enough grounds for convincing Sierra Leoneans about Bio’s responsibility for it, if any.  What appears hypocritical in all this is the failure by those critics to include in this important discourse other politically motivated executions and assassinations that have taken place in Sierra Leone since independence including those in 1974, 1979, and 1986.  While I remain a proponent of justice for politically motivated crimes in Sierra Leone, I believe strongly that the fairness of such pursuit largely depends on its equal application.  I want to also recognize that some of the key players in Sierra Leone politics today held various roles acting behind the scene during the NPRC era.  While many are now quick to distance themselves from the NPRC regime while masquerading as spotless politicians, a lot of them launched their political careers out of their roles in the NPRC.

Unlike many of us who remained in the US upon graduation and continued to live the American dream with attractive salaries and better lifestyle, Bio decided to return home to contribute to nation building.  And whilst in Sierra Leone, Bio has continued to demonstrate his commitment to the multi-party democracy he helped reinstitute.  But in the popular novel, Julius Caesar, Mark Anthony stated in his speech at Caesar’s funeral that, “the evil that men do lives after them; the good is oft interred with their bones.”   But since Bio is still alive, we must let the good that he did live on.

What is wrong with the Freetown Ci...

Flavour to ‘Waka Waka’ in Salone’s... 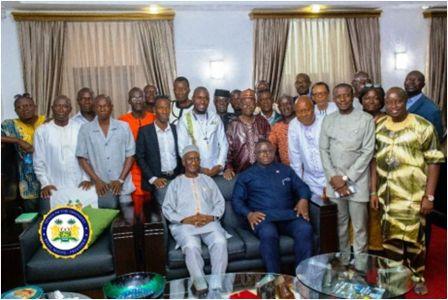