The Chairman and Members of the New Executive of the Political Party Registration Commission (PPRC) have today met President Ernest Bai Koroma at State House.

Formerly introducing the New Executive to the President, the Chairman Justice Samuel Ademusu on behalf of his colleagues expressed thanks and appreciation to the President for the confidence reposed in them to serve in their various capacities at the PPRC.

He promised that they will do all in their best to live up to expectations and put the interest of the country above self.

President Koroma congratulated them on their new appointment, observing that they were carefully chosen, as their role is very important especially during this ‘our political process’.

He said government has accepted democracy and that we all must strived to promote and maintain it.

President Koroma commended them for restructuring the Commission, in especially addressing issues within the political parties.

He said all efforts to adequately address political differences must be addressed among us rather than relying on foreign organizations to do so.

Elections, he noted are not war but a democratic process where everyone must participate in a civilized manner and that as Sierra Leoneans he said we must be free to associate with any political party of our choice.

He called on them to ensure that violence is minimized and a free and fair playing ground created for all. No doubt he challenged them it is a heavy task but that government will render its support.

Members of the New Executive are:

In another engagement at State House President Koroma handed over the official staff symbol of authority to three newly elected paramount chiefs of Kissy Teng,, Masungbala and Mongo Chiefdoms.,

He informed that elections were successfully conducted in these chiefdoms and they were duly elected as Paramount Chiefs.

He gave their names as:

Addressing the recognized Paramount Chiefs, President Koroma firstly congratulated them and referred to the day as a big one for the elected chiefs having given the mandate to run their Chiefdoms.

He said Chieftaincy must be maintained, as an institution to promote the development of the country.

“As new members you have taken over leadership in your chiefdom and you must endeavor to treat all your subjects as equal, regardless if they were on your side or not,” President Koroma implored them.

He said the role of Chiefs must be development oriented and called on them to concentrate on agriculture, health, infrastructure and other related developmental projects. 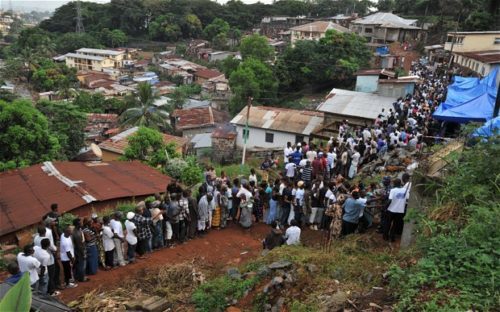