Hope International Church and Ministries opened its sanctuary to the community for a week, as hundreds of people from all walks of life and diverse nationalities swarmed its doors from all over the metroplex to witness the anointing hands and voice of one of Sierra Leone’s most spiritually gifted men of God, Reverend Archibald Cole (in photo).

The spiritually charged week of anniversary celebration began on January 17 and ended on Sunday, January 23.  During this period, the church had a span of activities ranging from Morning Glory, revivals, financial and immigration workshops, community and leadership appreciation banquet to Anniversary service on Sunday afternoon.

Since the birth of Hope International Church, it has had numerous revivals but the last anniversary revivals were in a special realm of the sprit.  Revivals in the life of the church are a period when the Holy Ghost does an extraordinary work.”  The key word in that definition is the word “extraordinary.”  At unpredicted times and in unpredicted ways, the Holy Spirit enters the church to bring about unusual events in the lives of men which bring about drastic change in the lives of men and churches – Hundreds in the congregation will testify to the spiritual anointing and authority of Rev Archibald Cole.  In order to jump start the revival and pave the way for Rev. Cole, Apostle Williams and Bishop Samuel Boyabei of World Evangelism Ministry and Champions Temple in Ohio respectively, opened the revival week with a strong presence of an awesome God. These mighty servants of God amply demonstrated their gifts and talents in spiritual warfare.

The unique features of these revivals are, first of all, that they came especially at a time when the community is characterized by the evils of world mindedness and dead spiritual work. “Because many churches have been conformed to the world and, as a result, have died spiritually, it is at such a time, if revival is to come, that it comes as an unusual working of the Spirit”, Rev Archibald Cole said.

The revivals at Hope International Church were characterized by and had their beginnings in a work of the Spirit which brought about, in the people upon whom the Spirit fell, a deep and profound, an extraordinarily disturbing consciousness of some of the weak foundations that they or their fathers laid before them. As Rev Cole dwelled on “weak foundations”, there was an effusion of the Spirit, an outpouring of the Spirit in unusual measure, an outpouring of the Spirit in great abundance, so to speak, which brings about and manifests itself in a profound and even unnerving and frighteningly disturbing passion to be cleansed from whatever it has been holding God’s people back.

The experience that Rev Cole’s revival brought to the people of Hope and all its worshippers was a closer union with God and experience of fellowship with Him that it defies human description. It is a wholly emotional and completely unearthly absorption into mystical union with God Himself, and it has resulted in a kind of revival in the church which manifested itself in a new zeal for the cause of God and a new zeal for missions and for the conversion of souls, and has brought Hope International Church to a state of spiritual strength such as she had not known in her one year of existence and a class of her own in God’s Kingdom.

During her one year existence, Hope International Church has broken all history regarding a one-year old church and in the process has raised the bar sky high. Within the Sierra Leonean community in and around the HEB community in Texas, she continues to win souls for Christ and venture into territories that older institutions with deeper pocket turn their backs on. Bringing well accomplished men of God from all over the place to inject the breath of fresh air into her people’s life is just one of many goals.

This kind of revival is what men seek for today as the cure of all societies’ ills.

Other dignitaries that graced the occasion were: The first Gentleman and Lady of the City of Hurst, Mayor Richard Ward and his lovely wife, Primerica Corporation, Attorney-at-Law, Ola Adeyesun, community pastors and their congregations.

Why I am proud to be a Sierra Leon... 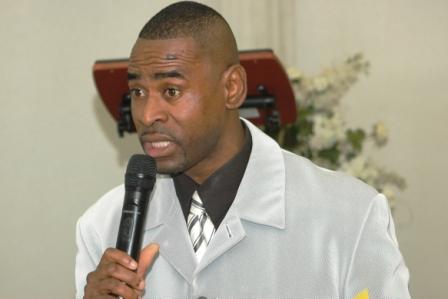