Latest report from the Finnish Football FA website has confirmed to Sierra Express Media that the Sierra Leone international who was among the run-away U-17 players in the Finland Fifa World Cup 2003, Mohamed Medo Kamara has had his application to play for the Finnish team as a naturalised citizen rejected by the football World’s governing body.

He expressed his feelings after Fifa decision that he was disappointed at FIFA’s refusal to grant him the right to play for the country he prefers to represent at senior national team level in the international scene.

“I’m disappointed with FIFA’s decision not to allow me to play for Finland, but I’m pleased that the process was conducted.  I would have gladly played for Finland’s senior national team,” said Medo.

He added: “I wish the Finnish national A team all the best in the European Championship qualifiers and in future competitions.”

He together with several of his teammates absconded from the team’s hotel and decided to seek asylum in Finland. He later applied for Finnish citizenship which he was granted.

This was part of the  reason for the player not to represented Sierra Leone when he was invited by Leone Stars Coach Christian Cole in October 2010 against South Africa.

The Partizan Belgrade midfielder who featured in the group stage of the season’s UEFA Champions League with the likes of Arsenal is now left with no other alternative but to wear the green, white and blue of his native land Sierra Leone.

Before moving to Serbia he had played for clubs in the Finland top division league Kuopion Palloseura and Helsinki based club Helsingin Jalkapalloklubi. 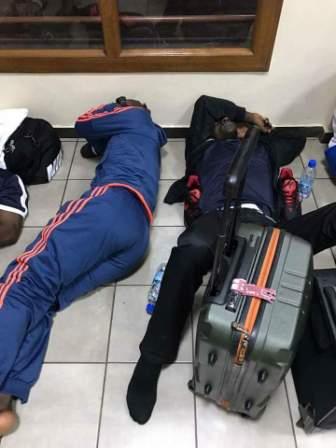