Homepages
Your trusted place for Sierra Leone and global news
Trending News
HomeGlobalLaurent Gbagbo: An embodiment of the Audacity of Arrogance

Laurent Gbagbo: An embodiment of the Audacity of Arrogance

Laurent Gbagbo: An embodiment of the Audacity of Arrogance

In spite of the continued economic woes unleashed on the world, it is refreshing and hopeful to hear that Iraq has finally agreed on a parliamentary body, nine months after elections were held.  The delay in the coronation had all been down to the demographics and geopolitical face of the power sharing government. Last month, North Korea pushed its recalcitrant behaviour to another notch, by bombing a village deep in the island bowels of South Korea. The world held its breath as Seoul’s response was contemplated. Every war veteran, war monger and to a large extent, war merchant predicted a robust response from Seoul. Thankfully for mankind, Seoul’s response was mature, moderate and as expected, laden with wisdom and patience. However, when South Korea’s step-father, the USA ratcheted the tension by conducting joint sea-faring exercises, North Korea, like the kettle calling the pot black, accused South Korea of provocation. The government threatened equal and opposite retaliation, if the USA-Seoul nautical playgroup went ahead.  (Photo:  Abdulai-Mansaray, author)

As the world waited with baited breath, Seoul grappled with its own internal problems from the backlash. Its mature response was seen by its own people as a mark of weakness. There were internal rumblings and in some cases, heads rolled as Defence Ministers were sacked or demoted. On the other side, the world was busy trying to predict North Korea’s response, following the Us-Seoul show of strength. It was therefore interesting that not only has  North Korea appeased the world (thankfully) by not responding militarily, but has even extended the hand of friendship to the nuclear inspectors. North Korea has welcomed back the inspectors to further verify its arsenal. Who said that Christmas has been postponed? No, it is the season of good will and there is a God. The recent changes in Iraq and N/Korea can be seismic in political terms. Sadly, Laurent Gbagbo has chosen the season of good will to sow the seeds of destruction among his people. The irony is that, following the elections which he lost, he had the audacity to declare himself the winner.  As if that was not enough, he extended the arm of reconciliation, stating that he “was ready to talk”. Talk about what and with whom?

Laurent Gbagbo has not only defied the ethics of common sense but has also shown his complete lack of respect for the Civilised world. There have been recent protestations from various organisations, condemning his behaviour. Unfortunately, the US has still not got to grips with how to deal with tyrants like Gbagbo. The US has considered travel bans on Gbagbo and his cohorts; as if jetlag is Gbagbo’s main worry. How often do people like Gbagbo need to travel abroad? How important is travelling to these guys? The International Criminal Court has promised to investigate, “if any crime is committed”.  The ICC should go one step further and tell Gbagbo that any bloodshed in Cote D’Ivoire will be tantamount to Crimes against humanity. Gbagbo should know that if he reverses the intended aim of reconciling the nation, following a decade long war, he will be tried as a WAR CRIMMINAL. Sadly, people like Gbagbo do not understand the language of diplomacy. They are so cocooned into their myopic worlds, that they have become diplomatically deaf and morally bankrupt.

When Sierra Leone conducted its election barely two years ago, following a decade of war and social instability, it was eye-opening to see that the SLPP, though reluctantly, gave up power as mandated by the people. Sierra Leone became a test case for all of modern day Africa and especially West Africa. It was therefore heart warming to see neighbouring Guinea read a few pages from “a short history of Sierra Leone”.  Therefore, it will be political homicide to allow Gbagbo to undo all the good work of Sierra Leoneans and the world’s democratic community. Under Tony Blair’s labour government, Sierra Leone was seen as a test case for the new wave of democracy. Sadly, Robert Mugabe was allowed to cling on to power, as it was misguidedly labelled as power sharing. Even though he lost the election, the international community turned a blind eye to Mugabe’s antics; all in the so- called interest of peace, and allowed him to illegally occupy the echelons of power in Zimbabwe. As we know today, the so called conciliation has only led to more gridlock. This has seen the country move one step forward and two steps backwards, even after it was allowed to sell its enormous stash of diamonds, to save itself from economic dialysis. All these could have been avoided if the international community had not allowed one man to hold it to ransom and allowed justice to prevail.

This is exactly what Gbagbo is trying to emulate; believing that if Mugabe could get away with it, so too could he. Most of the worlds political divide have now been solved by fusions, coalitions and reconciliations. This is because, there is now so little to choose between these parties. No wonder that the days of landslide victories are gone. The fact that the winning margins are so small is indicative of politicians singing from the same hymn sheets. In Britain, it is a coalition between the Liberal Democrats and Conservatives, after all 3 parties failed to get outright majority. Even in the USA, where the Democrats govern on paper at least, the reality is that some form of compromise must be struck even between strange bedfellows or political divorcees. Nevertheless, that ruling party is decided by the ballot box and not by brute recalcitrance. The world, Africa and West Africa in particular watched how the Republic of Guinea came close to unleashing a tribal war on itself. Considering that this was the closest Guinea had come to a democratic election, its citizens and especially Cellou Diallo should be commended for tolerating the interest of his people above any egotistical tendencies.

The world and especially Africa should not sit by and allow the sacrifices of nations like Sierra Leone, Guinea and many others go down the drain because of one man’s stubbornness. If these good legacies are to survive, people like Laurent Gbagbo need to be confined to the political scrap heaps of the 1980’s. He is a political dinosaur who should know that the days of one-party states and political vagrancy are long gone. From where I am standing, Laurent Gbagbo should be charged with political homicide; if for nothing else, but for having the audacity to insult the intelligence of not only Cote D’Ivoriens, but the African race in general. Without sounding emotional, I believe that Gbagbo should be the first man to be indicted of war crimes even before the crime is committed, for having the audacity to declare himself as the president of Cote D’Ivoire, even though the people’s mandate show otherwise.

A new wave of democracy in Africa is in its embryonic state. There are lessons to be learned here, as Africa’s political sands of time shift away from coup d’états, rebel wars and etc. With other countries edging towards elections, Gbagbo should be used as the political torch to all watching and listening. As for ECOWAS, they are still waiting to convene a meeting on Christmas Eve. The last time Christmas Eve took such meaningful dimension, a certain idiot called Charles Taylor, attacked Liberia, via Cote D’Ivoire on 24/12/1990. God Forbid. 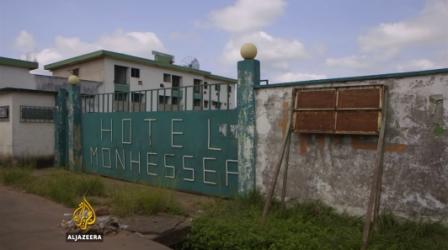 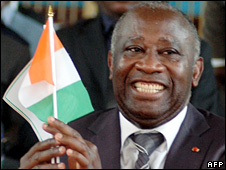 ICC Credibility and the Case against Lau...