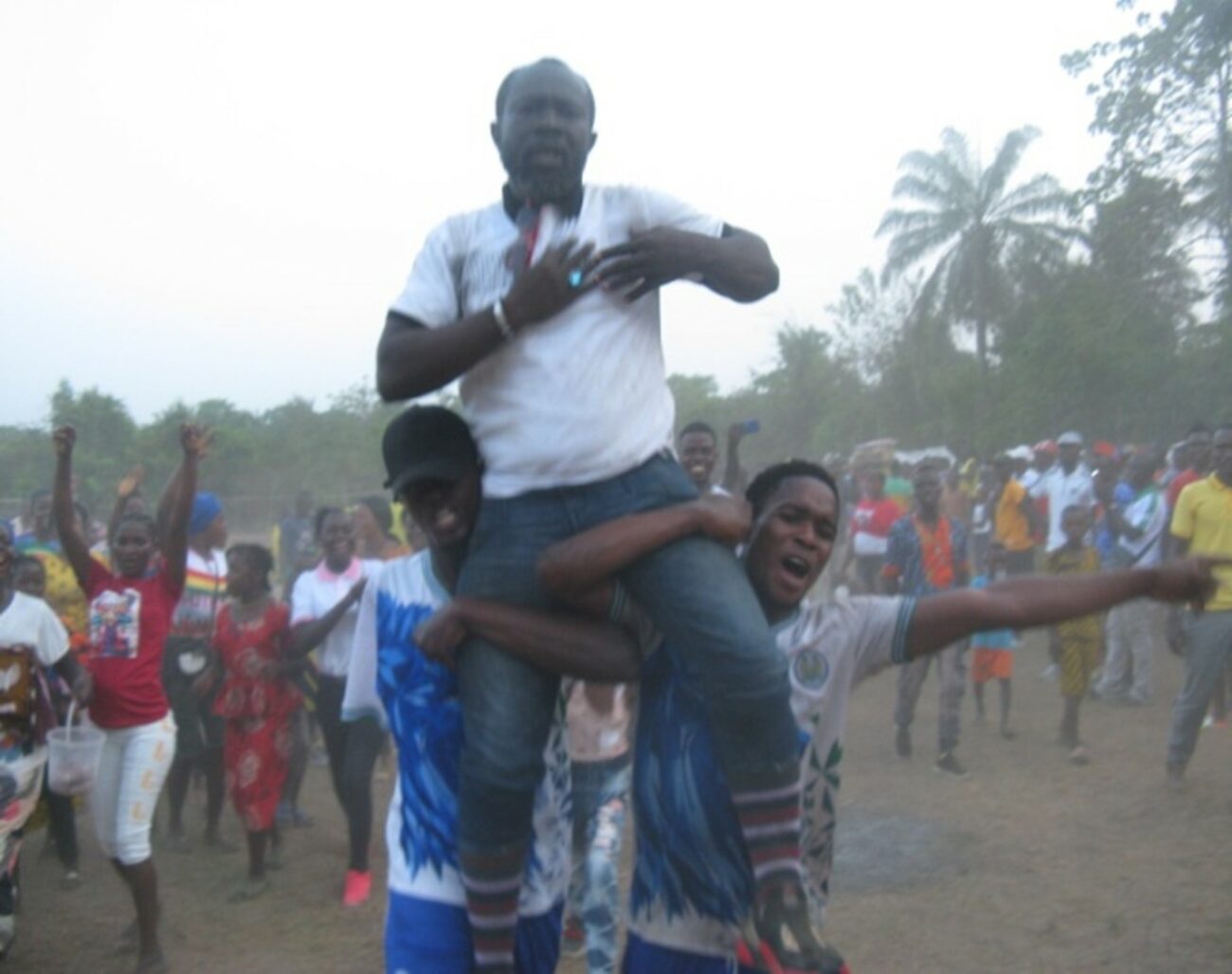 As part of their nationwide tour to scout for young talented disable footballers, the Sierra Leone Polio Football Club (SLPFC) has just recorded another big win by defeating a prominent town called Patfu Town FC by 2:1, in a decisive final at Massimor Village at Maforkie Chiefdom in the Port Loko District, after lifting the CAMA CUP final at the Casablanca Playing Field at Aberdeen on December 29th 2021. (Photo: Polio FC players and Coach Vidal after defeating Patfu Town FC.)

This victory at Massimor came initially as a result of the competitive matches played by the Sierra Leone Polio Football Club at the Magbontho Village early in February, during a show organized by HARRAS MONEY ENTERTAINMENT CLUB from the 24th -27th February 2022.

Before now, the team had toured several districts, towns, villages and rural communities with the sole support of the Technical Manager, Coach Mohamed Lamin Koroma aka Coach Vidal, with sponsorship from his International Partner ,Manager Erik from Demark, starting from Aberdeen in Freetown at the Casablanca Community Field, Mile Thirty Eight, Masiaka, Songo, Serabu Town in the Southern part of Bo and other surroundings, in a bid to improve the team in terms of fitness, endurance, technicality, capability and professionalism.

At Magbontho, from the Harass Money Entertainment Gala 2022, Polio FC won their opening match against Magbengbera Village and progressed to the finals with Foindu FC, who also won their first game against Tiama FC.

The Polio FC team was defeated by Foindu FC in the finals by 4:1, but the referee was blamed for match fixing and other irregularities, coupled with professional misconduct against a team that has done well in both able and disable football.

In another encounter at Massimor Village, a three days gala was also organized by sons & daughters of the Massimor village, but this time round, Polio FC was able to win all the games, including the final against Patfu Town FC, which they won by 2:1 on the 9th March 2022, in honor of the International Women’s Day Celebrations.

The three days gala started from the 7th -9th March with four participating teams including the Sierra Leone Polio Football Club from the Western Area Rural, the Madora Town FC, Magbengba, and Patfu Town FC, all in the same Maforkie Chiefdom in Northern part of the country.

The Polio FC was highly honored for their brilliant performance against Magbengba in the first opener and progressed to finals with Patfu Town FC, where they defeated them by 2:1.The game was superb with goals from Pofihno and Mohamed Rooney Bangura, who happens to be a potential striker for Kallon FC in the near future.

The gala was designed specifically to honor women & girls from Massimor Town on the International Women’s Day and that most of the supporters were actually women and girls, in close collaborations with their village male counterparts. These women & girls showered praises on the side of Polio FC because of their disability status.

Nevertheless, the Polio FC team had recorded and won over four finals from January to March 2022, and had only lost one game against FOINDU FC from Lungi at the Harass Money Entertainment Gala 2022, wherein the current themne Queen in the Music Industry, Madam Marie V also commended Polio FC for their wonderful performances despite their disability condition.

I never dreamt this would happen i...

After Failing To Qualify For Afcon...