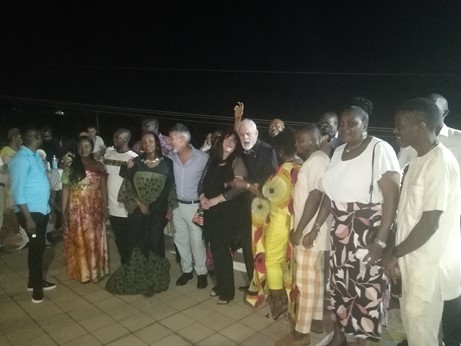 Management and Staff of Freetown Terminal Limited, a subsidiary of Bollore Transports and Logistics Group, were joined by government officials, customers, friends, and well-wishers to host a cocktail dinner for their departing friend, mentor, and hero, Captain Fabjanko Kokan who has served as Country Manager for Bollore for the past seven. Held at the Hub Restaurant on Friday 4th February 2022, Captain Kokan’s departure was celebrated for a major landmark he created in transforming the Company and helping to boost the country’s economy.

Other staff like the Country Human Resource Manager – Claudia Morgan and Finance Manager all have positive stories to tell about the quality leadership provided by Captain Kokan. “He is a man of his words. He is caring, disciplined, a great mentor, and a mixer who does not discriminate against people,” they said and added that he will be sadly missed by the workforce.

The newly appointed Country Manager of Bollore Transport and Logistics, Bertrand Kerguelen was full of praises for his predecessor, adding that he enjoyed working with him and had learned a lot from Captain Kokan. He assured his team that he is willing to continue with the development left by Captain Kokan and admonished his workers to do their best for the good of the company and country.

Addressing his audience, Captain Kokan said although he is going to work next-door, Guinea, his eyes and heart will always be in Sierra Leone, a country he has enjoyed serving for seven years, and furthered that he enjoyed working with a committed and dedicated team throughout these years. He added that he worked under challenging moments like, during the Ebola Outbreak and the COVID-19 pandemic, the company has never ceased operations during these trying moments.

Captain Kokan assured that the company is always willing to serve Sierra Leone even after he must have left. He thanked his management and staff for giving him the support over the years and admonished them to continue serving his successor.

It could be recalled on 24th September 2021 at Menthaba Village in the Sanda Tendaren Chiefdom, where the Bollore Country Manager was officially accord with the title Pa Kapr Komrabai Kawaleh (meaning Ambassador of Light), by Ceremonial Chiefs.

The presentation of gifts by individuals and companies climaxed the event.