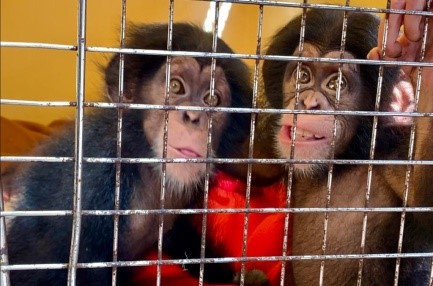 The Tacugama Chimpanzee Sanctuary (TCS), in collaboration with the National Protected Area Authority (NPAA) and the Sierra Leone Police, on Wednesday 4th August 2021 confiscated two baby chimpanzees (Camila and Charlie both of whom are between two and a half months old) from Father Ignazio, founder and proprietor of the Earthbank Bungalow Guest House at Lokomasama Chiefdom in the Port Loko District, Northern Sierra Leone.

The two chimps are now undergoing rehabilitation at the Tacugama Chimpanzee Sanctuary at Regent.

Father Ignazio revealed that he bought the two chimps for an undisclosed amount from the local (Loma) market in the area when they were three months old at the time, rehabilitated them and that he visited the TCS to hand them over but the place was closed adding that he took them to the veterinary doctor at the Lungi Government Hospital for treatment revealing that he has spent a lot of money to take care of the two chimps and observed that the founder and Director of TCS, Mr. Bala Amarasekaran should have invited him for discussions to hand over the chimps to him.

He further disclosed that he opened the guest house, botanical gardens, eco-lodges and other facilities 15 years ago, that in the past he collaborated with TCS in the Discovery Sierra Leone Project, that he has visited TCS several times, including a visit to make arrangements to handover the two baby chimps and that he also sought legal advice as to which government institution he should handover the chimps to asserting that he is also ready to collaborate with TCS as he holds the sanctuary in high esteem for doing a great job.

The police representative informed Father Ignazio that they are collaborating with the NPAA to protect wildlife, the ecosystem, forests, wetlands as well as the flora and fauna in Sierra Leone.

The Camp Manager of TCS, Mr. Willie Tucker commended Father Ignazio for cooperating with the team and assured him that the two chimps would be adequately taken care of like the over 100 chimps now at the sanctuary, that their names would not be changed and that he is allowed to visit the sanctuary in the future to see how they are adapting.

He also reminded all that the killing, eating and taking care of chimps as pets is illegal and that Father Ignazio is at liberty to work with the TCS to protect animals and the environment.

Mr. Bala Amarasekaran intimated this medium that he used all peaceful means for the Italian priest to handover the two chimps but that he challenged government’s authority by resisting to hand them over, that Father Ignazio went to the extent of instructing his lawyer to call and inform him that his client (Father Ignazio) is planning to open a sanctuary for chimpanzees and other animals for touristic attraction.

According to the TCS founder and Director, Father Ignazio also argued that if he (Bala) is running a chimp sanctuary, he too can do same but that he enlightened him that TCS is a government owned-institution with the mandate to rehabilitate chimps.

The two chimps will be quarantined for three months before they are allowed to integrate with others.

It must be underscored that chimpanzees, Sierra Leone’s National Animals, are endangered and therefore illegal for any individual or institution to keep, traffic, kill or eat them.

Everyone must respect the wildlife laws and the public is encouraged to report any illegal activity related to the chimps and the environment to the NPAA, TCS or the nearest police station.

Signing of the handing over documents between TCS and Father Ignazio climaxed the event.

Truth vs Technicality in Sierra Le...

Armed Men on The Rampage: Fourah B...