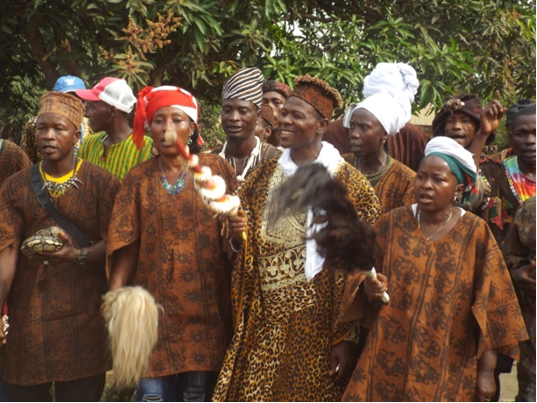 Seventy initiators into the “Bondo” (Female Genital Mutilation-FGM) secret society called “Soweis” in local parlance in Tonkolili district northern Sierra Leone, have over the weekend handed over their tools to the Amazonian Initiative Movement (AIM), an NGO in Port Loko campaigning against the harmful traditional practice.
The ceremony, which attracted the Human Rights Commission and other partners, took place on Friday March 26, 2021 in Matotoka Town in Tonkolili District.
Speaking to Sierra Express Media, the Director of AIM, Rugiatu Neneh Turay-Koroma, said this was the fifth batch of Soweis handing over their tools.
She said the ceremony was as a result of the continuous advocacy and sensitization her organization had been doing, noting that scores of women and young girls had been persistently suffering from the complications of FGM and that the Soweis had realized that it was  time to stop the harmful traditional practice.
“We have done so several trainings and held workshops with Soweis and they have all agreed to lay down their tools. We are here today because we want the country to know that we have joined the world to end FGM. We are always yarning for women to take a centre stage in development, yet we are still in the “Bondo” bush and we can only achieve this through education,” she said.
According to the Demographic and Health Survey of 2019, Tonkolili District has the highest prevalence of FGM initiations in the country.
“We celebrate with these women today because it takes a moment for them who have been practicing FGM for decades to do such disarmament especially when they take the practice as their livelihood,” Director Neneh stated.
Making her contribution, the chairperson of Human Rights Commission of Sierra Leone, Patricia Naarsu Ndanema, said the gathering of the Soweis shows their willingness to surrender their tools.
She added that their office had received cases of FGM and they had taken swift response to address them.
The human rights defender noted that Sierra Leone is a signatory to many treaties including the Maputo Protocol which talks about putting an end to the practice of FGM.
She congratulated the Soweis for laying down their tools and also called on them to serve as ambassadors and watch dogs in their communities.
One of the voluntarily disarmed Soweis, Sampa Gbla, narrated that she was in SSS1 when they initiated her in the bondo society and after her initiation she dropped out of school and become a Sowei.
She confessed that the initiation impacted her life negatively and was given to early marriage and gave birth to many children.
Hawanatu R. Conteh, a pupil used the opportunity to call on the government to respect the treaties they have signed to protect and promote women and young girls.
She appealed to the Paramount Chiefs, Section Chiefs and other authorities concerned to stop issuing certificates to Soweis for the initiation of young girls.
The ceremony ended up with signing of agreement between AIM and Soweis.

By Mousa E. MassaquoiStay with Sierra Express Media, for your trusted place in news!