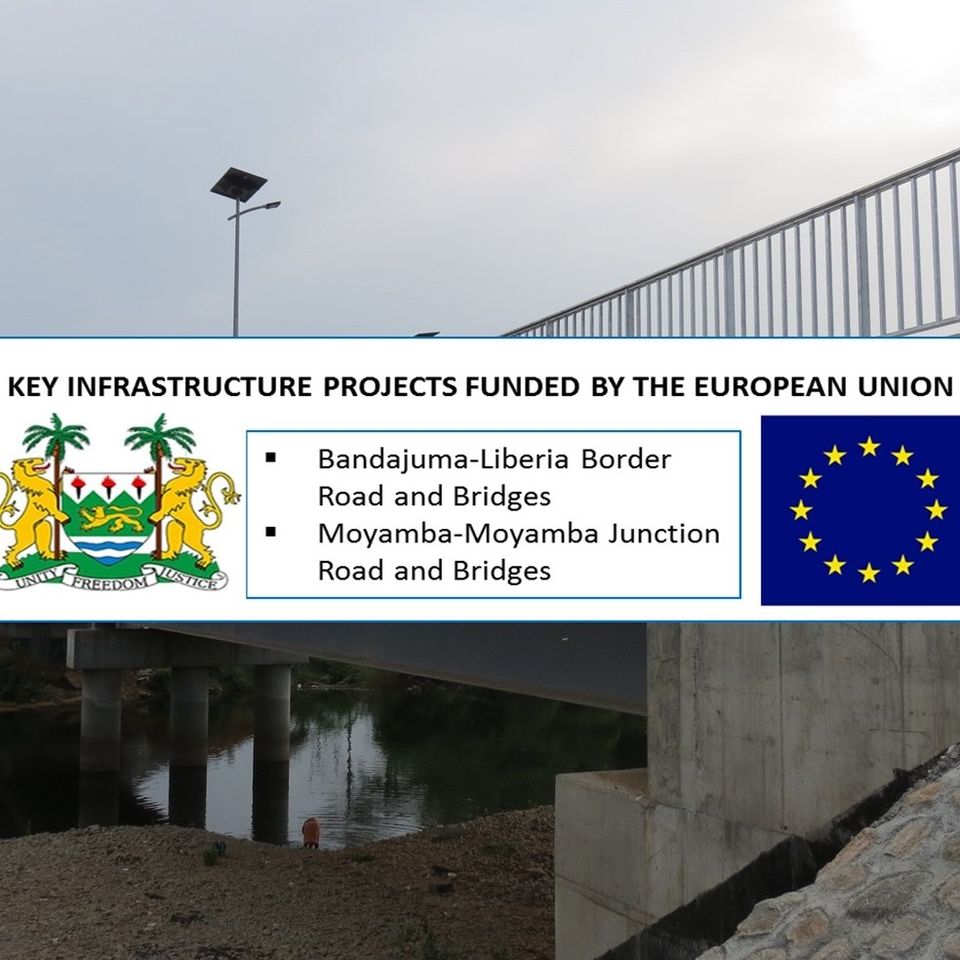 The European Union under a Framework contract procedure has contracted the International consulting firm AETS Consortium to carry out feasibility studies and conceptual design of the remaining six (6) of the thirteen (13) ferry crossing points to be converted to Bridges as part of its support to the key infrastructure project in the country.

The studies for the seven crossing points are already being funded by the World Bank under the SCADEP programme. The Mabang and the Moa bridges are currently being constructed over two other ferry crossing points apart from the 13 identified nationwide, with funds from the European Union.

The start of the assignment which was originally earmarked for March 2020, was delayed due to the covid-19 pandemic. The Team Leader (Wim Ruys) arrived in the Country in the first week of September 2020, followed by the Transport Economist, Irvin Cohen in the third week of September 2020.

The Director of the NAO Ambrose James and his Deputy Robert Ganda held a brief meeting with the Experts at the NAO office where they discussed the resumption of work after some delays due to COVID-19 restrictions.

The Consultants will be working closely with the National Authority Office (NAO), Sierra Leone Roads Authority (SLRA), the European Union Delegation in Sierra Leone and other relevant partners. Ambrose James and his deputy assured the consultant of NAO’s full support and cooperation when they will be taken to the field to introduce the purpose of the mission and ensure that appropriate protocols and communications are followed through with communities and stakeholders in the identified communities to ensure a smooth execution of the assignment by the consultants.

In order to improve connectivity, the National Development Plan prioritizes the replacement of these ferries through bridges across the rivers. The construction of these bridges will open the various parts of the country to cities and urban areas, as there will be free movement of people, goods, agricultural and fishing products to market centres in different parts in the country.

The Government of Sierra Leone expects to linkup Regions, Districts and Chiefdoms through the shortest routes and hence unlock communities that were otherwise cut-off from the road network. Generally, the provision of bridges across these ferry crossings will facilitate internal trade and commerce because the routes will be shortened and transport cost is expected to reduce considerably.

These roads on which the inland hand operated cable ferries are located are the economic routes of the country. They are fed by rural roads from agricultural productive areas which in turn lead to urban and cities. They are also major border routes linking the Districts/regions, chiefdoms and regional Headquarter Towns, and amongst them are international roads linking Sierra Leone to Guinea and Liberia, for example the Kabba ferry crossing connecting Guinea Border through Kamakwei – Madina Oula; Bandajuma ferry crossing leading to Liberia border through the MRU Bridges.

The European Union is currently financing the construction of four bridges under Moyamba-Moyamba Junction Road and Bridges and completed three bridges under the Bandajuma road and bridges Project.

These ferry crossing points have created bottlenecks and cut-off key links in the road network especially during the raining season. Motorists and passengers otherwise use long and treacherous routes to get to their destinations.

More information on the EU’s support to the infrastructure sector in Sierra Leone can be found on the NAO website www.nao.gov.sl. and at the Key Infrastructure Project Facebook page @eukeyinfrastructureprojects