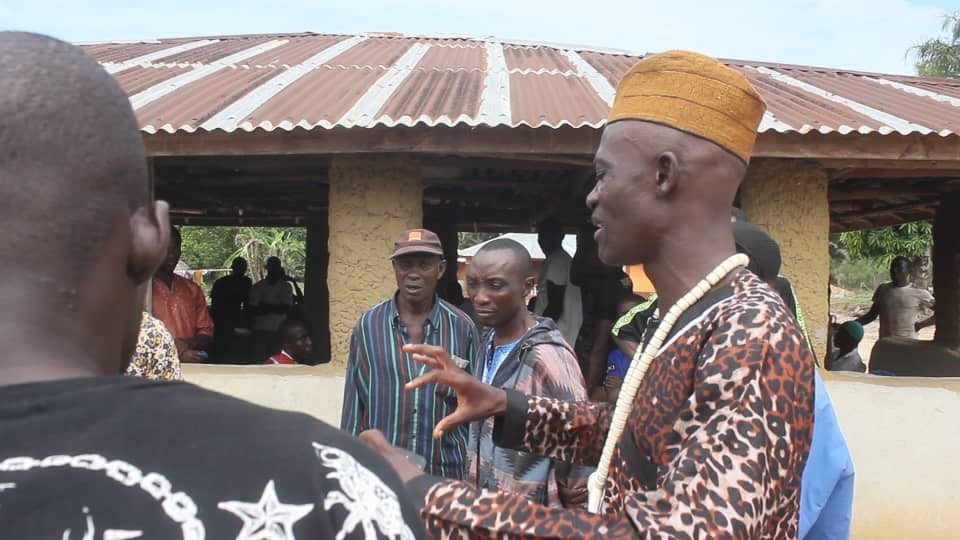 On Monday 6 May 2019, at about 100 residents of Bomatoke Town in the Timdale Chiefdom, Moyamba District were rudely awaken from their sleep by a group of marauding hooligans comprising over 300 women and men armed with machetes, knives and sticks who ruthlessly attacked the town burning down houses, looting properties and mercilessly beating residents within their reach with anything they can lay hands on, effectively rendering the village a ghost town.  (Photo: Moyamba LUC, Hon. Mustapha and PC Joseph Stevens Sologni implicated)

To add salt to injury, the innocent victims of assault, larceny and arson were locked up at the Moyamba Police Station and later transferred to the Bo Town police division. Apparently and most disheartening for the villagers, their assailants were freed by the Local Unit Commander of the Moyamba Police Division, an act believed to be orchestrated by the Honorable Member of Parliament of constituency 95 Hon. Mustapha Musa Sellu in conjunction with Paramount Chief, PC Joseph Stevens Sologni of Timbale Chiefdom.Lahai further explained that later in the night he heard shouts of distress from his neighbors and when he came out, he saw a crowd. As news of this unfortunate event reached Freetown a team of journalists from various press houses visited the Chiefdom and met with the aggrieved parties and later spoke to the other concerned persons. Their first stop was at the Bo government Hospital where some of the victims were admitted and are still in police custody. Lahai Musa, Deputy Town Chief of Bomatoke Town said that he was hit with a machete on his head and Limbs, inflicting serious wounds all over his body. “I was hit on the head by Morrie and others, they came to our village on Sunday 5th May 2019, on the instructions of the Paramount Chief to stop our Agricultural training workshop, which was in progress to improve our skills and familiarize them with the developments in the cultivation of Cassava and Banana, organized by Gabriel Madiye of the Shepherds’ Hospice in Sierra Leone (NGO),” he stressed. He went on further to explain that the workshop was comprised of 5 farmers from each section in the chiefdom, but maintained that Morrie and his team from Bomoro, where the chief resides, said they will not participate as the Paramount Chief has not given his approval for the workshop to hold. He dismissed this allegation as false, adding that he personally went to inform the PC, but he was not around and all efforts to reach him on the phone proved futile.

Deputy Town chief, Musa further explained that Morrie and team insisted that the workshop should not go. Gabriel Madiye, he went on, then told Morrie that as proof that the PC has ordered the termination of the Workshop, he should produce a note with specific instruction to discontinue the meeting and not verbally. He further disclosed that during the argument that ensued, someone said that the PC should tread carefully as he is a Chief that has been petitioned. This statement offended Morrie and co and after much commotion they left.

Later that evening, Morrie Stevens, a junior brother of the Paramount Chief and two other guys came with the Paramount Chief’s XL motor bike and after locating Sahrda, slapped him in front of his home. After that brief scuffle was separated, Stevens left threatening to return later and deal with him. Lahai further disclosed that later that night he heard distress cries from his neighbors and when he came out to find out about the cause of the noise, he saw a huge group of men armed to the teeth with machetes, clubs, sticks and traditional arms, breaking doors and beating inmates. He however maintained that he was able to identify some of the assailants; chief among them was this Morrie guy.

Upon trying to plead with Morrie to leave the villagers alone, he was hit on the head with a machete by Morrie and the crowd pounced on him beating him with all sorts of weapons in their hands. He stated that some of them, who were injured, were taken to the Moyamba Police station for medical form to take treatment at the hospital. Much to his surprise, he added, the police arrested them and locked them up until the next day when they were transferred to the Bo police station. At the Police station in Bo., Lahai said that they spent several days in police cell before they were allowed to see any doctor at the Bo Government hospital, where they are still in police custody. He also maintained that “after a week in police cells those who were not seriously injured, were released on bail, but should report to the Bo police station twice a day, while some are still in hospital.”

Matilda Kaikai, a resident of Bomatoke and one of the female aspirants who contested with PC Joseph Stevens Sologni during the past chieftaincy election, said that after the election they were faced with series of attacks from Dauda Sesay, a Former Councilor and the Chairman of the Police Partnership Board. She further disclosed that Fatorma Momodu, Jusu Mansaray (the current chiefdom speaker) and the Paramount chief were aware of the attacks but no one has been broght to book. She explained that she had on several occasions made reports to District officer and Mr. Kellie from the Office of the National Security in Moyamba, but nothing has been done. “They are taking advantage of me because I am a woman. Whenever they want to invade my community, they come out with the ‘Poro’ secret society to intimidate me and my people, so I am calling on the Women’s Organization and the government to help me,” she said amidst tears.

She also disclosed that she had petitioned the current Paramount Chief and the matter is still in the high court in Bo. In her submission, she said that since the current PC is not from a ruling house, she is certain to have won the case had verdict been given and this ugly situation would not have happened. Matilda lamented that for the PC to stop attempts by an organization to bring development to the chiefdom speaks volumes of his motive. She commended the work of Gabriel Madiye for the good work he is doing in the Moyamba District and the country as a whole, adding that his organization has built a standard hospital which serves more than three chiefdoms in the district.