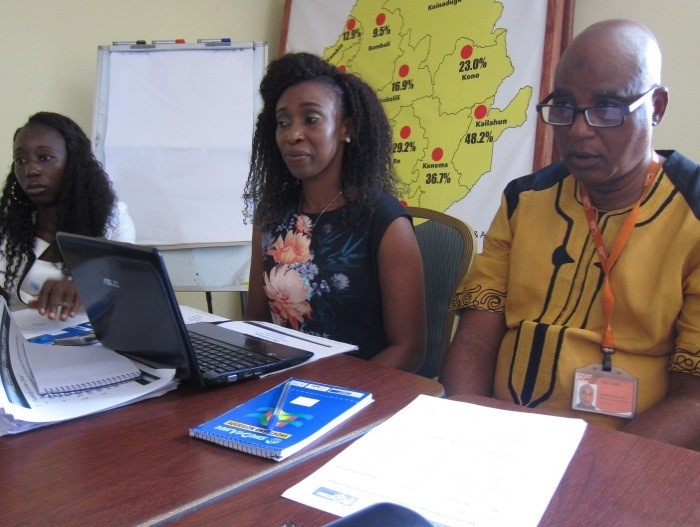 For Sierra Leone to have credible data for national development, Statistics Sierra Leone with Supports from its development partners USAID, World Bank, DFID, UNFPA, Global Fund and the Government of Sierra Leone has set to conduct the Third Sierra Leone Demographic and Health Survey (SLDHS) for 2018 in the country.

Giving an overview of the SLDHS, the Communication Lead Publicity Committee at SSL, Marian Macmillan Bangura, said the survey is implemented by the SSL on behalf of the Ministry of Health and Sanitation, with technical support from ICF International, adding that the survey is guided by government structure which include a steering committee and a technical committee direction to get quality data at the end of the activities.

She furthered that the SLDHS is a national survey that will be conducted in all 16 districts and 578 areas were randomly selected nationally where the survey will be carried out.  Madam Bangura informed the public that interviews will be conducted in 72, 093 household and 15-49 Women total to 100% and for Men 15-59 total to 50% will be interviewed during the exercise.

The Communication Lead said both Men and Women questionnaires have been put in place to collect data from pregnancy, birth, infant and child mortality, maternal health, ANC, delivery postnatal care and child nutrition, including breastfeeding among other information.

In his Statement, the Chief Executive Officer, Focus 1000 Mohamed B. Jalloh said this is the first time their organization is taking part in such a survey but however described it as a step in the right direction because according to him they have been championing child mortality, breastfeeding, child nutrition among other areas the survey will be focusing on.

Mr. Jalloh stressed on the need for massive education before, during and after the survey in order to achieve the aim of the SLDHS for 2018.

He called on everyone to join and support the survey activities for the betterment of the country.

Other speakers also made meaningful contribution which was held at Focus 1000 Headquarters office in Freetown on Monday 13th May this year.