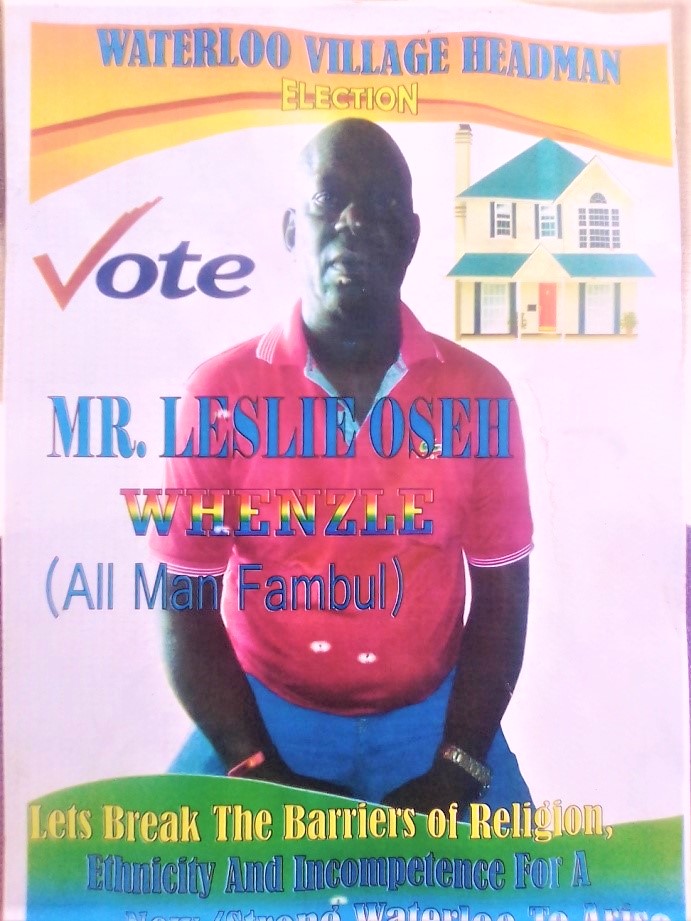 As Waterloo Village Headman Bye election schedule for the 18th May  2019, one of the favorite aspirants, Mr. Leslie Oseh Whenzle (All Man Fambul) who will contest other two aspirants including Elizabeth Betts and Alusine Hassan Sesay has vowed to deliver on promises by installing pure pipe borne water ,health centers, schools and improve housing facility for the people of Waterloo especially Ebo Town and beyond through his professional advocacy skills.

He made the inspiring statement during a house to house campaign which attracted the attention of various stakeholders including traders, bike riders, drivers, youths, women, Sierra Leone Police among other key community people on Monday 13th May, 2019 at his residence, Ebo Town, Cal-mount Road, Western Rural Area, Tombo Junction in Waterloo.

In his good will message, the aspiring Headman, Leslie Oseh Whenzle says the forthcoming Waterloo Headman election which is scheduled to take place on 18TH May 2019, was as a result of the death of former Headman who he described as God fearing Headman with vision.

In that regard, Mr. Whenzle said, based on his experience he was admired and chosen by young people and stakeholders of the village to contest for this cosmopolitan village election which comprises York Road, Congo Town, Ebo Town, Market Square and Jugbor Town because of his past track records in advocating to government and international partners for housing facility.

The aspirant said, Mr. Leslie Oseh Whenzle said the empty seat should be contested democratically without violence, hate speech or intimidation because according to him the election is all about peace building and that whosoever wins must work for the interest of the land.

He assured community people of his unflinching support towards national development and that if God be his helper by winning the 2019 Waterloo Headman election, he will deliver more on housing facility and pure pipe borne water as his flagship projects.

Mr. Whenzle expressed confidence to Commissioner of the National Electoral Commission (NEC), Madam Miatta French for her vision in installing integrity, discipline and trust to the exercise and call on residents to vote him for his experience, dedication, commitment and grassroots improvement.

“Vote me in and let’s break the barriers of religion, ethnicity, tribalism, regionalism and incompetence for Waterloo to rise. Before now, Mr. Whenzle said, he was an advocator and human rights defender throughout his undertakings.

Mr. Leslie Oseh Whenzle emphasized on the need to invest in housing facility with huge investment by encouraging private investors, council and central government  noting that his symbol is house which means, he said housing is the most important component for human being on planet earth. He continued that whether he is elected or not he would continue to lobby to restore housing projects for the general good of the people as housing is one of the challenging issues facing most citizens.

Mr. Whenzle admonished young people to refrain from violent activities and think positive for the development of the region in terms of road network, water, health, education among others.

He explained plan to create new innovations by connecting pipe borne water from big water sources to communities for the provision of pure drinking water across waterloo like it used to be in the past.

He concluded by encouraging residents who were eligible to vote in this election to come out massively on Saturday and vote in his favor for the betterment of all.

SLPP gov’t jeopardizes life of for...