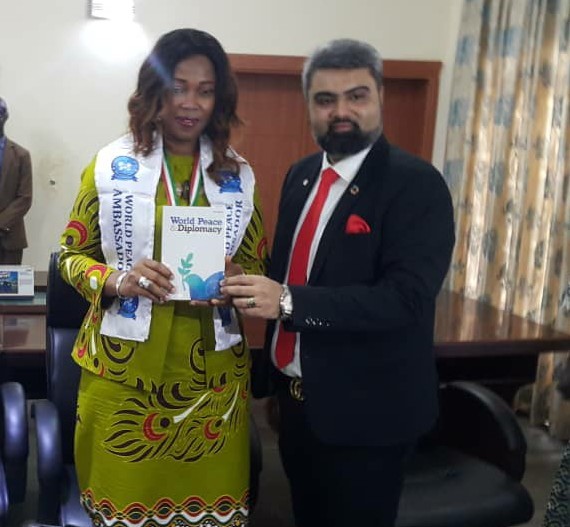 The First lady of the Republic of Sierra Leone, Her Excellency Fatima Maada Bio, on Friday May 3, 2019 was recognized and awarded a medal as World Peace Ambassador by the World Peace and Diplomacy Organization, making fourth on the list in Africa.

Speaking to pressmen, the founder and chairman of the organization Prof. Dr. GD Singh said the award is in recognition of fighting the gaps created by social, racial and gender discrimination which they believe the first lady has worked assiduously in tackling them.

‘’Thank you for focusing your attention to Sierra Leone as a nation; for you to know that we are doing something good and for me to be given the opportunity to be bestowed with such prestigious award. I will continue to do more than what I have become, and to continue to work for humanity and the nation”, said HE Fatima Bio.  In receiving the award, She said was  expressed her delight and satisfaction for the huge recognition and title bestowed on her, citing the capacity of her husband as President who has actually created the platform and enlarged the space to be able to do more and not disappoint the world.

‘’Meanwhile, the award medal to the first lady gives some kind of face where we see a sign of progressive Sierra Leonean people who actually can see beyond their own country, and the World Peace and Diplomacy Organization has been exponentially working to see that we don’t only recognize people in Africa but in the whole of the world’’ said Professor Singh.

He emphasized that they have been travelling all across other countries to bestow this kind of title on very selected distinguish individuals of high repute, adding that they have different categories of titles for different levels including peace messengers, and youth peace ambassador awards among others.

He further dilated that the number of awards given so far is around 20 and Sierra Leone is among the first four in Africa.

Since its establishment in 2011, the Organization has been working to gain recognition by promoting the United Nations Sustainable Development Goals in order to see that the world is growing, and the organization is achieving these global goals, one of their aims is to making sure that the goals are respected and followed by all nations compounded with integrity consciousness altogether.

Where Is Sierra Leone's Valen...