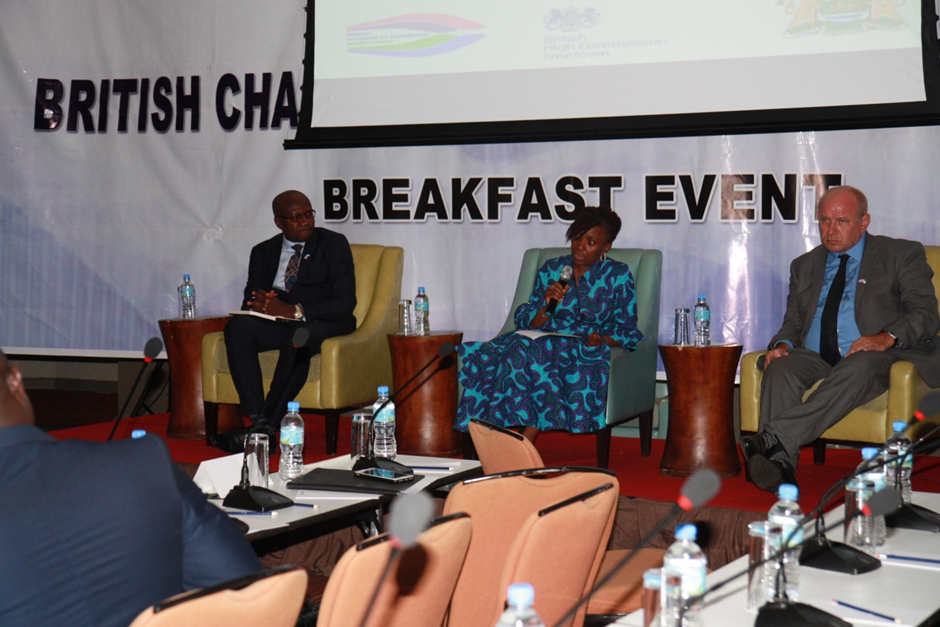 On Tuesday 30th April, the Minister of Planning and Economic Development, Nabeela Tunis, presented the Government of Sierra Leone’s Medium Term National Development Plan 2019-2023, to the British Chamber of Commerce in Sierra Leone. She said that the government recognised that the private sector is key in ensuring the successful implementation of the plan. The Hon. Minister Nabeela Tunis reaffirmed the government’s commitment in ensuring not only the development but also the implementation of a policy framework that will serve to improve the investment climate and promote foreign direct investment. The Minister noted that “The private sector is government’s main development partner” and said that she believes the British Chamber membership that includes major foreign and global players will not only serve to act as business reform agents but can serve as a strategic partner that provides requisite thought leadership, knowledge and expertise in helping the government shape its investment policy and framework”

The event took place at the Radisson Blu Hotel and was attended by various companies that makes up the British Chamber of Commerce in Sierra Leone and other critical stakeholders.  Also in attendance was the British High Commissioner, HE Guy Warrington who also doubles as the Vice Chairman of the Chamber.

In his opening statement, Mr Idrissa Kamara, the Chairman of the British Chamber of Commerce in Sierra Leone who is also Chief Executive Officer of Standard Chartered Bank Said;

“As the Chamber seek prudent, credible and proactive dialogue with the government, today we have the pleasure of having the Minister of Planning and Economic Development; Madam Nabeela Tunis as she presents to us the country’s “Medium Term National Development Plan 2019 to 2023.  As a Chamber our hope is today, will serve as the first of many engagements, that we will seek with the Government as we work to create and forge a credible, dependable and sustainable strategic partnership aimed at transforming Sierra Leone into an investment friendly destination.  Our investments are creating jobs and continue to positively contribute to the socio-economic development of this country”

“The Chamber views this session as a positive step under the New Direction.  Members see this forum as an opportunity to articulate and harmonize our views on issues we consider critical for the successful implementation of the plan and also in promoting and sustaining foreign direct investment in the country.”

“Government recognizes that business-led initiatives, such as research and development partnerships, knowledge-sharing platforms, technology and skills transfer, and infrastructure investment have the potential to kick-start development, enable productivity gains, generate better quality jobs, strengthen skills and promote technological advances- This is why the Private Sector is the Government’s main Development Partner”

She further commented that; “the Chamber which is a vibrant private sector has a lot of influence and reach beyond what we have in the room and that It is good opportunity for the Chamber to act as a business reform agent.  The government believes that the membership of the Chamber has wealth of knowledge and can leverage our know-how and share expertise, in helping and giving some amount of direction as to how to go about creating change without any negative impact.  We also feel that you are a critical partner in policy dialogue. We have been talking a while about the PPD (Private Partnership Dialogue) and believe that this is a start for the private sector in taking the initiatives and dialogue in influencing policy reform.

Post her presentation, members of the Chamber engaged the Minister on various issues and challenges that they are facing, in the execution of their various investment in the country and thanked the Minister for her frankness and reassurance that despite these challenges, the government is committed in driving the requisite and needed changes to policies and framework that will positively improve the business.  She noted that “It might be quite interesting to note that one of the main reason that led to considering and working on the National Investment Board emanated from various engagements with the private sector and the Government’s recognition that the private sector is a critical partner in national development and must therefore be supported to ensure that this sector thrives and is enabled to execute on its investment aspiration.  The National Investment Board will as intended serve as a one stop shop to address specific concerns and specific challenges of the business communities. It is also Government’s desire as to how they would pull the different strands with the business communities and become more responsive to the business communities.

She concluded by thanking the British Chamber of Commerce in Sierra Leone for creating this private sector platform for dialogues and indicated that the ministry and government will seek for more of this, indicating that she will work with the Chamber for another private sector dialogue to include other critical line ministries. HE Guy Warrington in his closing also thanked the Minister for honouring the Chambers invitation and noted that it is critical for the Ministry and the Government to deliver on its various initiatives aimed at improving the business environment to encourage investment. He noted that “the UK spends about 75% of its investment resource on initiatives that are geared towards promoting and protecting existing investment”. Happy existing investors can be your best sales representatives and they are the people who anyone will phone before making an investment. Existing investors are also the best source of further investment having already committed to the market.  The resurgent British Chamber is committed to working with the Government in investment promotion in line with the objectives of the Chamber. This meeting is just the first stage in an essential dialogue between the government and the private sector”

The British Chamber of Commerce Sierra Leone was launched on March 2nd 2012 with the objective of “Aiding and encouraging the development of trade, commerce and investment between Sierra Leone and the United Kingdom.