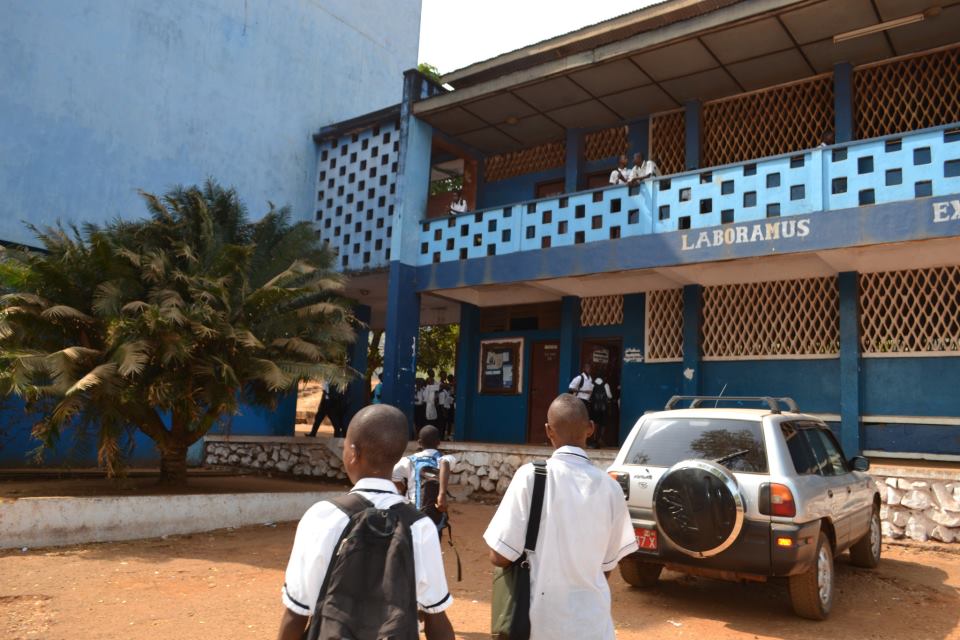 Time, they say, “passes as if it does not exist,” but the events of women and men will always serve as a true testimony to one’s life experience. We were driving along some busy and dusty streets of Freetown. It was with my good old friend, Daniel Bunting Johnny. Le Bunt (Bunting’s alias), son of a retired Colonel in the Sierra Leone Army was born and raised at Wilberforce Barracks and later, Tengbeh Town. An affable fellow who is relaxed, and blessed with extraordinary skills of effortlessly putting the clock on hold to satisfy and making his buddies jolly- jolly.

It was a day with the kid. My 14-year-old daughter, Aminata was with us, and so were Bunting’s kids of similar ilk- Melissa and Daniel when the discussion veered on our school days and how I used to walk for probably about five miles, on a crowded pothole-riddled dusty road from Peacock Farm, Wellington to Thunder Hill and back just to attend school.

Aminata could not believe what she was hearing. She exclaimed, “Oh Daddy! Daddy, you are just making it up!”  Visibly shocked at my revelation, she wondered, “How could that even be possible? Didn’t granny and grandpa pay your way?” Unlike myself, Aminata, now in SS1 does not have to walk her way from Juba to Jomo Kenyatta Road for school.

I did walk every day to and from school, and I was not alone. Pupils from Allen Town, Calaba Town, Portee, Brima Lane and Kissy joined those of us from Wellington to walk to schools such as Boys High School, Congress, Kankalay and Independence. Walking was a way of life- not that we wanted it, but we enjoyed it.

In 1987, I had just passed the Selective Entrance Examination, but unlike many of my peers who chose Ahmadiyya or Muslim Congress, I gained admission to High School. So, every school-day morning, I trekked from Peacock Farm to Kissy Mess-Mess for the Methodist Boys High School (MBHS) at Thunder Hill. The school was founded on 6th April, 1874, with Rev. Joseph Claudius May as its first Principal. I am not sure why I wanted the school. Maybe, the urge to wear the school’s ceremonial uniform- a blazer, white shirt, black pants, black shoes and a striped necktie played a part. I jealously admired my neighbours, the Nbompa Turay boys, splendidly dressed in their neatly and well-starched coats and well-oiled black shoes whenever they attend their Thanksgiving and Prize-giving ceremonies.

Before the school year started, I joined hundreds of other tiny-looking boys to attend Summer School on campus. It was the first time I got to know that Mathematics had a definition. Pa Mackay, a ‘very senior citizen’ was our math teacher. From a nearly torn exercise book that he may have used year in and year out, Matching Set (his nickname) roared: “Mathematics is the basic principle of all sciences. To know Mathematics, one must understand Arithmetic, Algebra and Geometry.”

Reverend Olivia Wesley, whom we nicknamed ‘God Mamie’, taught us the Doxology, the Benediction, Psalms 23 and 121, prayers and Hymns from the school’s passport- the Hymnal. She prayed for God to cast us off of our sins whenever we acted mischievously, and sometimes, she does so with the rod. She also groomed some of her students, like Reverend Gibrilla Kargbo of the New Life Ministries to be men of God.

Our Pianist and Music Teacher, Levi Lewis, whom we christened Carters taught us the School and Foundation Day songs and prepared us for Thanksgiving and Nine Lessons and Carol hymns. In charge of the choir, the robotic tall and lanky perhaps 70-something-year-old figure was the threat that every pupil was afraid of. He beat up the boys for anything and everything, even for things such as one’s name. Rumours have it that he once caught a boy at the corridor when he was supposed to be in class. “What is your funny name?”  the soft-spoken Carters asked to which the boy responded, “Santigie Sorie Gbateh.”  As if in shock, Carters exclaimed, “What! A Santigie Sorie at the Methodist Boys High School? I will beat you until 2:30 PM!” That day, Sorie received the beating of his life.

Teachers like Mrs Massengor Mammie, Mrs Dupigny, Mrs Vincent, Mrs Moigura, C.J Budkin (the Vice Principal whom we called Sir Bodday) and Max Peters made the school pleasant for us. It was not the same for the other teachers who sanctioned severe flogging the de-facto policy of the school. This we got to experience firsthand when the school year started.

That fateful first day of school, it was Milphord Alfred Sanimeh Kamara who came to pick me up.  He had his back-pack heavily loaded with all the books he was going to use for the entire year. His pockets were full with extra cash he got from well-wishers who bade him farewell. Milphord was wearing an ‘awuwah’ crepe (black and white-laced sneakers with studs famously used for playing football on hard turf). As Bata was the brand name then for shoes, I wanted to have a new pair of design but only got a ‘From Father to son,’ pair for my first day.

My admission number was 10611 when I started at Form 1 Gamma. It was at Form Two that I got to meet Mugambo. He was articulate and the go-to person for reading in class. Our History, Literature and English teachers would always turn to him to read for us from the textbooks prescribed.

Mugambo was also liked because of his exceptionally brilliant and detailed narrative prowess of three-hour long Indian movies. In his narrations, he would give you the sound effects, sing the songs, throw a punch or kick almost precisely as it is delivered in the film. Through him, we got to watch favourite Indian movies like Disco Dancer, Burning Train and Sholay without actually having been to see them at the cinema. In the absence of a teacher, we would gather around Mugambo and urge him to explain to us a movie. We also had a sentry on the lookout for Pa Willie, the Principal.

Mugambo and I were later to do our Sixth Form at St. Edwards from where we both proceeded to Fourah Bay College, initiated into the Klymax Club and the Auradicals. Our Mugambo is Abdul Karim Bangura whom many know as onetime Dictator (Head) of the Auradicals Club and Mr Cool.

At High School, it was the severe flogging we got from teachers that still to this day leaves me in a quandary. Without taking the shine off some of the good days, the school was like a prison camp for us. Corporal punishment was ingrained in the DNA of teachers, whether it was Nathaniel Pearce who succeeded Willie O Pratt as Principal, Mr Maddy- the Scout Master, Nelson-Williams (Missile Devil), Duramani Sesay, Kessebeh, Raymond Pratt, Pa Mackay or, Carters.

Raymond Pratt, our Physics teacher, used to bat our hands with a hardwood whenever we could not answer his Physics questions. They made ‘getting someone to back you up’ (i.e. when you are lifted on someone’s back and beaten all over the body) the vogue. Other teachers flogged us with their leather belts.

I also had my own experience with this cruelty. I once failed to submit an assignment for Pa Mackay. On submission day, he called me to solve a problem on the blackboard. I could not. He pelted his cane on my back like raindrops while shouting, “you nor go ever learn Math.”

Nelson- Williams once flogged me with up to 76 strokes of the came because I found myself on the list of noise-causers in class. I still have the scars on my back from that severe thrashing.

The poundings from the teachers do not mean though we were all Saints on the receiving end. We also played our part, and sometimes, it was not palatable.  We were a bunch of troublesome and mischievous fellows who thrived on truancy, not submitting assignments, coming late to school, abandoning school before the end of the day to go and lay in wait outside of the Annie Walsh or St Joseph’s for the girls. Most times, bus conductors were afraid to allow some of the pupils to embark on their ‘poda-podas’ knowing fully well that once they get to their destination, they will run away without paying.

Mr Neville (Baba Neville), our Form Teacher in Form Four would walk to class with our report cards toward the end of the school term. He would point to students like Sallieu Sesay (Father Rambo), Mohamed Thomas and Bash, and ask them what they want him to write as a comment on their cards. Without waiting for an answer, he would pick out something for which they were notorious for, and writes: “Sallieu Sesay- Gyming is affecting your schoolwork, you may lose your place.” For Bash, Neville would write, “attitude towards learning is negative, you may lose your place.”  He even once wrote on Thomas’ report card that sleeping was affecting his school work, and he was going to lose his place.

I loved David S Nyakoi, our History Teacher. He made the teachings and lyrical quotes of Bob Markey very integral to his classes.  We however once stroked his anger when we pestered and shouted at him for our papers. Nyakoi had given us a History assignment, and he was taking his time to return our papers to us. Visibly angry, he stormed our class shouting; “what characteristics of you to be nagging at me when I’m passing by your papers! Your papers?” As if practised, “we beg sir,” we all responded.  He then retorted, “it’s the only language you know in this school- we beg sir!” and, he slammed the door behind him.

I also had my brush with the law at High School not once but twice for which my name was placed on the Black Book. The first was when a teacher formed a club and began teaching us about Gaddafi’s Green Book ideology. Once a week, we would meet after school. He encouraged us to chant, “Until true democracy, we shall not be moved,” and he tested our democratic and revolutionary curiosity. Whether he was trying to prepare us for what later become of the RUF rebellion, I would not know. However, Mr Pearce, the Principal got word of these meetings. We were summoned, asked to get our parents and our names placed on the book. Our innocent minds then only wanted to acquire knowledge from someone who motivated us, and unlike the others, did not lay his hands on us.

My second experience with the Black Book was when I was indefinitely suspended for almost the entire year due to strike action by students believed to be latecomers. Unfortunately, I was late that day. With no evidence, no trial and, with the administration serving as both judge and jury, all of us latecomers were painted with a broad brush. This was how justice; the High School justice was served.

Be that as It may, I am proud of what I have become. Those beatings and the Black Book did not define me. I am also pleased that I attended the Methodist Boys High School, where I was taught the roughness and tumble of life. So as the school celebrates its 145th Anniversary, I will conclude thus: “Long may be the tilling and the sowing late, but the fruits will ripen if you toil and wait.”