Charlotte Community in Sierra Leone Not Happy with Dr. Sandy 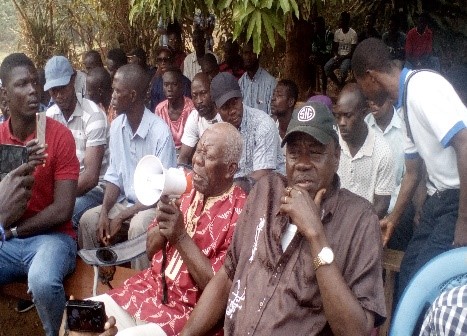 Charlotte Community in Sierra Leone Not Happy with Dr. Sandy

The indigenes of Charlotte in the Western Rural Mountain District have come together to challenge the aggressive Minister of Lands Country Planning and the Environment, Dr. Dennis Sandy over what they described as an illegal demolition exercise he mounted in the said community on February 28th, 2019 with the presence of heavy armed military men, OSD personnel’s and Forest Rangers. (Photos: Charlotte Indigenes, Lands Minister and his Deputy)

The distressed citizens said, the Minister’s insolent behaviour and his armed military officers scared away inhabitants to the nearest bushes adding that they have been intimidated, molested and their house properties destroyed under the supervision of Dr. Sandy without informing any elder or stakeholder.

Speaking at a well-attended meeting held at Charlotte environs on Sunday, March 17th, this year, the Chief Adviser for the Charlotte Indigenes Descendants and Development Association, Rev. Mathew Hughes who is now the oldest man at Charlotte said they were not expecting Dr. Sandy to appear in a ruddy manner and destroyed their houses without informing anybody. He discussed that Dr. Sandy overpowered them as a result of misused of political power by fabricating that, the demolished zone is found within a dam area.

The old man maintained that they were anticipating the Minister to have dialogue with them to arrive at an amicable solution but to their surprise, Dr. Sandy went ahead with force to demolish their land properties they inherited from their forefathers over three hundred years ago. ‘’Every land owner at Charlotte go through the due process to legally acquire land with registered master plan and signed by the Director of Lands’’, he told audience.

He described their fight to reclaim their lands as legitimate against somebody that stands to trample upon their rights.  He expressed frustration that the Minister demolished their structures, stolen tools like hammers, shovels and other farm implement with bundles of zinc. ‘’This is a gross violation of our human rights which as Charlotte indigenes would not take easy’’, he said. The Secretary General for Charlotte Indigenes Development Association, Dennis Valcalcel advanced that all those land documents were signed by previous directors in the Ministry of Lands. In that regard, Mr Valcalcel continued that he was surprised to see the Minister destroying building with impunity without informing anybody within Charlotte, a rural community that’s made up of five villages. He appealed to the Government of President Julius Maada Bio to step in and cautioned Dr. Sandy to dialogue first with citizens before destabilizing them because he said, power belongs to God.

Former Headwoman of Charlotte, Catherine Harding described Charlotte as a historical place where Annie Walsh Memorial Secondary School started and further described the action of Dr. Sandy against them as inhuman and detrimental to their existence. She said Dr. Sandy is just a human being like them but he took advantage of them because of possessing political power.

The Minister of Lands Country Planning and the Environment told Journalists during the demolition exercise that deforestation has contributed to climate change and shortage of water and mentioned that for the purpose of protecting the forest, they would not allow people to construct dwelling homes beyond the green belt area.

He ordered structures found under high tension area to be demolished and described the demolition exercise as a continuous process and stressed that as a responsible ministry, they are not happy with what is happening at Charlotte.

The Executive Director for Climate Change, Environment & Forest Sierra Leone (CEFCON-SL), Haja Kaday Sesay said the catchment area has dried up as a result of the massive deforestation adding that their role as Civil Society Organization was to observe the process only.

The Deputy Director of Forestry in the Ministry of Agriculture Forestry and Food Security (MAFFS), Sahr Kelly said they wanted to plant more trees to increase forest cover and described the demolition exercise as a follow up of the national land policy conference.

Senior Environment Officer from the Environment Protection Agency (EPA), Shaka Saccoh persuaded Dr. Dennis Sandy to stop all ongoing construction work at the protected areas and spoke on the essence to prevent disaster by allowing the right thing to be done.