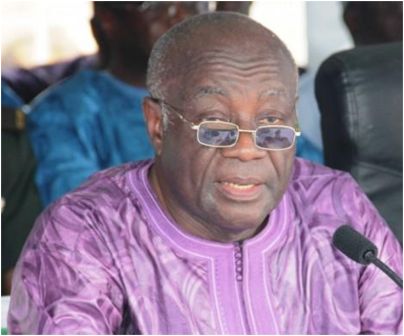 Members of Parliament of Sierra Leone’s main opposition, All Peoples Congress (APC), has said in a press statement issued on Monday, 25th February, 2019, that the House of Parliament did not approve President Bio’s proclamation of a State of Public Emergency and as far as they are concerned, there is no State of Emergency in Sierra Leone.  (Photo: Hon. I B Kargbo- Acting Opposition Leader)

The APC MP’s, who are in the majority in the House, made the statement in reaction to what they refer to as an inconclusive debate in which the Speaker surreptitiously determines a two third majority by a voice note which they say, was in violation of  what the 1991 Constitution stipulates  for a valid declaration of State of Emergency.

The release furthered that the APC is in total support of the President’s determination to combat rape and other forms of sexual violence against women and girls but the State of Emergency they say, is beyond the reach of President Bio.

They ended by reiterating their earlier position stating that the Debate for the approval of the said Proclamation was inconclusive; hence a Public State of Emergency does not exist. The Debate on the Proclamation, as far as the APC is concerned, is to continue on the next sitting of Parliament.

Below is the full press release:

Parliamentary sitting was abruptly adjourned to Tuesday 26th February 2019 without votes being taken as prescribed by the Constitution and the Standing Orders.

While we applaud President Julius Maada Bio in his determination to combat sexual crimes, it is in the legislative competence of Parliament to make laws for good governance. In this respect, our Constitution emphatically states in Section 105:

“Subject to the provisions of this Constitution, Parliament shall be the supreme legislative authority for Sierra Leone.”

Accordingly, we the APC Members of Parliament made our position abundantly clear in the Well of Parliament that we support the fight against rape and all forms of sexual violence against women and girls and that more punitive measures ought to be adopted to control same.

In addition, we the APC Members of Parliament hold the view that such measures are not beyond the reach of the President, as such can be adequately achieved by strengthening the Sexual Offences Laws and their enforcement followed by stronger regulations.

If President Bio wishes to have Parliament amend the Sexual Offences Laws and enact stricter laws and regulations, he should commence the initiative rather than pre-empt Parliament by proclaiming a State of Public Emergency.

We refer our objections to the International Community, Civil Society Organizations, the Media and all men and women of goodwill, that we share President Julius Maada Bio’s quest to fight sexual offences but we do not share his Proclamation of a State of Public Emergency and we frown on the heavy-handedness of the Speaker in attempting to carry the Motion for the approval of the State of Public Emergency by a mere ‘collection of voices’ contrary to the mandatory Provision of Section 29(3) of the 1991 Constitution and Standing Order 44(4) – for a two- thirds vote for its approval.

We therefore wish to reiterate that the Debate for the approval of the said Proclamation was inconclusive; hence a Public State of Emergency does not exist. The Debate on the Proclamation is to continue on the next sitting of Parliament.

In Sierra Leone: Unwarranted and F...