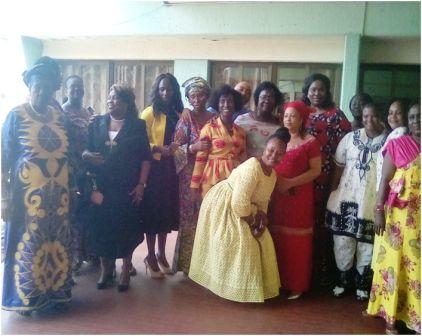 The Resolution on Women, Peace and Security Agenda was laid in Parliament for adoption on Thursday 14th February, 2019.  (Photo: Members of the Female Caucus)

In her statement, the Parliamentary Female Caucus President, Hon. Veronica Sesay emphasized on the important role women and girls are playing in society adding that women and girls have been marginalized everywhere in society.

“That is why donor partners considered it very essential to bring the resolution in the House of Parliament for implementation”, she told colleague Members of Parliament.

She reiterated that the United Nations Development Program (UNDP) is working in collaboration with them to ensure the security of women and girls is guaranteed.

The law maker stressed that women would commit themselves to what he described as an important agenda and mentioned that the legislators are more supportive to implement the resolution than ever.

The Hon. Member of Parliament for Constituency 132, Lumley in Freetown, Ibrahim Tawa Conteh who is a member of the Oversight Committee on Female Caucus   spoke on the numerous problems faced by rural women especially to feed, clothe and send their children to school.

”We are pushing forward as a team with serious action for the implementation of the Maputo Protocol in full”, said Hon. Ibrahim Tawa Conteh.

They also take cognizant of the right of article 21 which talked about the right of inheritance as Sierra Leone is a male dominated society where rights of women and girls to inherit property are not guaranteed. He spoke about how discrimination against women and girls is common in the Northern part of the country in terms of women inheriting properties and to take part in decision making and good governance.

As a signatory to the Maputo Protocol, Hon. Tawa said they are expecting this government to demonstrate full commitment to accelerate the implementation of the agenda so that our women and girls would be taken to the top and realize their potentials.

According to Hon. Tawa, Article 23 of the Maputo Protocol is a special protections for women and Peoples With Disabilities (PWD’s) who he said are all over in the streets of Freetown with wheel chairs begging to feed themselves and family members.

He deliberated on the important to give access to PWD’s to gainfully employ commensurate to their social and economic problems.

He discussed that women and children suffered mostly the consequence of the eleven (11) years brutal war. “Women deserved respect”, he said.

Hon. Hassan Priest Sesay of Constituency 050 in Tonkolili District who also serves as Chairman of the Committee on Social Service and compared those girls in remote areas and those in the city as experiencing the same marginalization but he said, early marriage is common among village girls than those in the city.

Hon. Dixon Rogers emphasized on the important for women in high position to help their colleagues who are begging in the streets and those hanging around beaches to attract men.

“Women themselves should have respected for each

Other no matter their position or the level of education or job”, he told the House of Parliament.

Are Commissions of Inquiry Our Las...