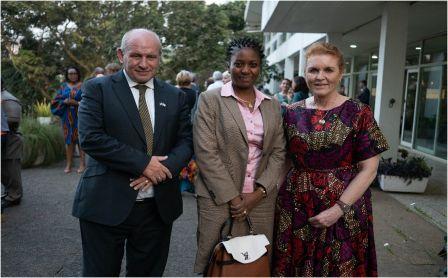 On Thursday 7 February, the British High Commissioner, Guy Warrington Hosted Sarah Ferguson, Duchess of York at his Residence in Freetown. The Duchess made her first trip to Sierra Leone to visit Street Child’s projects and to launch their new ‘Schools for Tomorrow campaign’ which aims to build, renovate and re-energise 1,000 schools in Sierra Leone over the next 5 years.  The aim is to give over 100,000 children access to a quality education that will lead them on the path to change their world.  (Photo: The UK High Commissioner, Guy Warrington, Hon. Minister of MoPED, Nabeela Tunis and Sarah, Duchess of York)

At the reception dinner, The UK High Commissioner, in his welcome speech thanked the Duchess of York for coming to Sierra Leone and publicising the match funding that DFID has given to a range of charities such as Street Child.

“Without them, the UKAid would not be able to deliver the support to the government in delivering its New Direction programme. Sierra Leone remains the country in Africa where we have the biggest per capita development assistance programme. Without our delivery partners, we simply could not have supplied the drugs to mothers and the under-five under the Saving Lives project, We could not have built WASH facilities in schools, We could not have built 500 off grid solar projects linked to health care facilities and we could not have provided textbooks and teaching plans to schools in support of His Excellency Julius Maada Bio’s flagship free quality Education project. We are extremely grateful for your support.”

“It is fair enough to say that while we all embrace the government’s vision of moving from Aid to trade, at present, the NGO and not for profit sectors constitute the largest portion of the international community here, greater than the foreign private sector.  They are an economic sector in themselves and a growth sector. Your organisations does not only employ people directly, you consume vast quantities of local goods and services all of which boosts growth in this country”

Sarah, the Duchess of York said:

“I am really proud to stand up here today because I have never been more inspired than going out with Street Child today at Port Loko. I want to thank Sierra Leone, the government and NGOs for their tireless work in promoting education for children in Sierra Leone.”

The reception was attended by the Honourable Minister of Planning and Economic Development Hon. Nabeela Tunis, The Mayor of Freetown, Yvonne Aki-Sawyer and Representatives from the UK and NGO community in Sierra Leone.

The Minister of Planning and Economic Development, Nabeela Tunis said: “With all these people here today, all those representing the NGO community, there is a lot we could not have done without your support. I take this opportunity to encourage you to do what you have been doing. There is no small NGO, all of you have made an impact in diverse ways” As a Government, we have put Human capital at the core of our National development plan, and certainly, education is the most critical component of our plan – Education for development.”