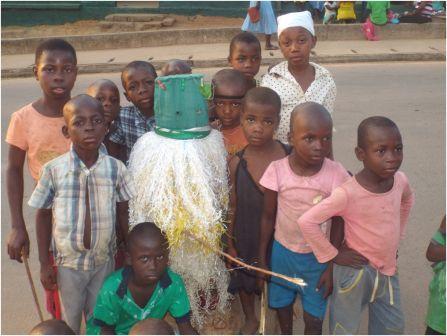 Thousands of school children in Kailahun District last Friday 25th January, 2019 joined older folks with cultural displays to welcome President Julius Maada Bio to Kailahun Town as part of his thank-you tour of the district since he was declared winner of the 31st March, 2018 presidential runoff election on 4th April.

It could be recalled that prior to his thank-you tour of Kailahun District in Eastern Sierra Leone, the President had visited the Kono District headquarters of Koidu city in the same part of the country as part of his thank-you tour.

One of the pupils, Mathew Jabbie, who was dancing with colleagues and singing songs of praise and redemption in Mende, told The Health Newspaper that as beneficiaries of the Free Quality Education introduced by President Julius Maada Bio’s New Direction Government, they are happy for the interest the Head of State has shown in their personal development and well-being.

On behalf of colleagues, Mathew Jabbie extolled President Maada Bio for reintroducing the monthly national cleaning as, according to him, it has helped greatly in keeping the township of Kailahun and towns and villages in the entire district. The pupil added that the monthly cleaning exercise would help reduce the spread of diseases like malaria, cholera, diarrhoea and other air-borne and water-borne diseases.

Many Kailahun residents amongst the jubilant crowd that spoke to The Health Newspaper on the President’s thank-you tour expressed optimism that the President’s development agenda would affect their district positively. They were optimistic that the Bio administration would not only succeed in developing the country’s battered education system but would also complete the construction of Phase II and Phase III of the Kenema-Koindu Highway. Phase I which is between Kenema and Pendembu in the Upper Bambara Chiefdom, Kailahun District was completed and commissioned by former President Ernest Bai Koroma; Phase II which is between Pendembu and Kailahun Town is under construction, while Phase III which is between Kailahun and the once popular international market centre in Sierra Leone – Koindu has not yet begun.

During his tour of the district, President Bio also visited Bunumbu in Pejeh West Chiefdom, Segbwema in Jaluahun Chiefdom, Daru in Jawei Chiefdom and Mobai in Mandu Chiefdom respectively. He engaged different stakeholders in all the townships he visited in the district.

Addressing residents in Kailahun Town on the importance of the three Commissions of Inquiry that will commence today, 29th January 2019, President Bio emphasized that the action would help curb corruption among unpatriotic civil and public servants.

President Bio assured the people of his Government’s determination to improve the country’s health sector by making health facilities accessible and affordable to every Sierra Leonean, whether rich or poor. He then handed over medical equipment to the Kailahun Government Hospital amidst pomp and pageantry.