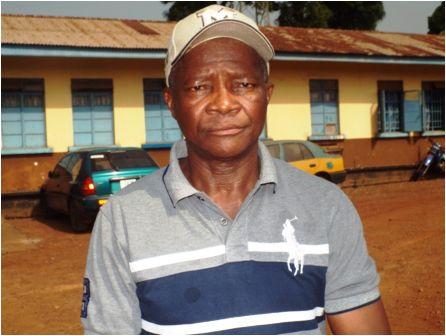 The Mayor of Port Loko municipality, Northern Sierra Leone, Abubakarr Zoo-Zoo Kamara has cautioned the Paramount Chief of Lunsar, Marampa Chiefdom that, even though he was not informed as father of the municipality during the signing of what he described as misdirected crooked deal land agreement between Sierramin Bauxite Mining Company and landowners at the Maforkie and Marampa Chiefdoms but he stands to protect the rights of his subjects who he referred to as poor farmers in the interior. (Photo: Mayor Of Port Loko, Abubakarr Zoo-Zoo Kamara Stands By His Subjects)

Speaking at the Port Loko Police Division in an effort to free the nine landowners arrested at Yankasa Village and illegally detained by Police officers during the early hours of 29th December, 2018, Zoo-zoo Kamara said he had issued stern warning to the mining company to stop all dealings until all necessary concerns raised by landowners are addressed adding that PC Koblo Queen (II) and management of Sierramin Bauxite Sierra Leone Limited promised to meet him before Christmas celebration to settle the impasse but to no avail.

In a vexed mood, Mayor Kamara condemned the ongoing secret mining activities practiced by Sierramin Bauxite in an area governed by not the District Council but by the municipality adding that the nine indigenes were arrested around the illegal mining site because they are against the five years bad land lease agreement signed in full supervision of the chiefdom custodian, PC Koblo Queen and other stakeholders for self-aggrandizement at the detriment of the poor and helpless landowners who depend on farming activities for their livelihood.

In a telephone conversation, Mayor Kamara informed PC Koblo Queen that he disagreed with the Bauxite mining company for ordering Police officers to arrest and detain the poor landowners and stressed that he would not stand and watch his people succumbed to brutalization and  marginalization for the good of few selfish people in society. “I was shocked to hear such bad news that a pregnant woman who was allegedly beaten and stripped naked by some reckless Police officers at Yankasa Village was among the nine apprehended landowners who spent over 72 hours in Police custody”, he told PC Koblo Queen in the presence of some senior Police commanders.

It was at that stage PC Koblo Queen responded to the Mayor that he will soon contact the Assistant Inspector General of Police (AIG), Ambrose Michael Sovula for their release, which took place the next day.

In a telephone conversation, AIG Sovula told this medium that the nine suspects were liable to arrest for misbehavior while ASP Daniel Nicolson explained that they had earlier warned rioters not to take the law into their hands alleging that, the demonstrators mobilized to burn Sierramin Bauxite building at Yankasa Village. He confirmed that they arrested the rioters for obstruction and put them in detention while waiting for instruction from the AIG.

Report also alleged that Police used fire arms (live bullets) against their own people during the riots but Police denied that they never used fire arms but tear gas canisters to quell the riot.

It could be recalled that sometimes ago, Sierramin Bauxite, PC Koblo Queen and other political heads went into agreement to pay seven dollars per acre for the company to start mining operation, a decision that did not go down well with landowners of Maforkie Chiefdoms who were allegedly represented by a section chief during the signing agreement.

In another development, the company has reportedly paid for eighteen thousand acres in the tune of one billion eight hundred and eighty four million Leones but stakeholders in the district pronounced only what was on top the one billion Leones and shared the huge amount among themselves.

Allegations stated that PC Koblo Queen (ii) alone went away with over two hundred million Leones while some family members shared one hundred thousand Leones among themselves, a situation that resulted to confrontation among villagers who have vowed to deal with anyone who may attempt to do any illegal mining on their lands without their consent.

In several media interviews, PC Koblo Queen had been persuading land owners to allow the company to start mining activities so that they would increase the amount per acre from seven dollars upwards but the disgruntled landowners resisted that they would no longer listened to PC Koblo Queen because he was not representing their interest and they called for a review of the crooked agreement before anything like mining takes place.

Speaking on behalf of the company, Head of Survey, Steven Kamara challenged Mayor Zoo-Zoo Kamara that he has no power or authority to prevent Sierramin Bauxite from their mining activities in the site. He explained that during the agreement, landowners were fully represented and officials from National Mineral Agency (NMA) were also part of the agreement. He argued that three family members from Mabureh Village accepted and received the seven dollars for fifty nine acres. On the issue of honoring Corporate Social Responsibility (CSR), Steven Kamara said they have not only planned to construct a primary school at Yankasa Village where the company’s headquarters offices located as soon as possible but they will also extend the aid to other villages.

The fact of the matter is that, there is no school in most villages in the two chiefdoms especially at Mabureh Village where the school is built out of thatch roof which could not allow children to sit under it to learn during the height of the raining season as a result of persistent leakages. By and large, there is no good road leading to most of the villages in the environs.

The poor landowners are therefore calling on the intervention of His Excellency (Rtd) President Brigadier Julius Maada Bio through the Ministry of Mines and Mineral Resources for the poor landowners of the two chiefdoms to regain justice before taking the law into their hands.